Susan Slusser & Ken Korach - - If These Walls Could Talk 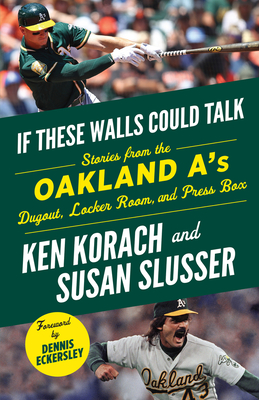 EAST BAY BOOKSELLERS welcomes Susan Slusser and Ken Korach to discuss their new book If These Walls Could Talk: Stories from the Oakland A's Dugout, Locker Room and Press Box, on Saturday, June 15th at 11am.

Throughout their history, the Oakland Athletics have been one of the most audacious and individual franchises in all of baseball. As the longtime radio voice of the A's, Ken Korach has called countless improbable, unforgettable moments. As the San Francisco Chronicle's veteran beat reporter, Susan Slusser has become the preeminent scribe of the A's modern era. Both have witnessed more than their share of team history up close and personal. In If These Walls Could Talk: Oakland A's, Korach and Slusser provide insight into the A's inner sanctum as only they can. Readers will gain the perspective of players, coaches, and front office executives in times of greatness as well as defeat, making for a keepsake no fan will want to miss.

Susan Slusser has been the San Francisco Chronicle’s Oakland A’s beat writer for more than 20 years. She is an MLB Network correspondent and is a former president of the Baseball Writers’ Association of America. She is the author of 100 Things A's Fans Should Know & Do Before They Die.

If These Walls Could Talk: Oakland A's: Stories from the Oakland A's Dugout, Locker Room, and Press Box (Paperback)