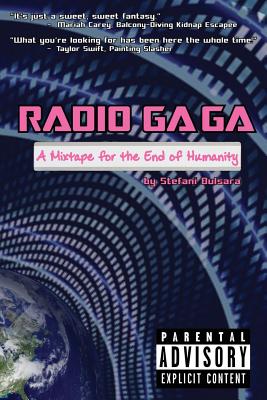 EAST BAY BOOKSELLERS welcomes Stefani Bulsara to read from Radio Ga Ga: A Mixtape for the End of Humanity on Thursday, September 19th at 7pm.

Pop Culture is the Opiate of the Masses

Come follow a mysterious, glitchy narrator who races through the universe, tasked with warning any sentient species about humanity's cautionary fail. Our narrator attempts to answer humanity's greatest philosophical questions to create a history of what led to their extinction. But our narrator can never surpass our radio waves, those careless whispers Earth has leaked into the universe, tickling any alien listeners with the absurdity of humanity. (♪ Saxophone Solo ♪)

Who did let the dogs out? What does the fox say?

What happens when AI takes over humanity's emotional language & manipulates them with it?

Can the Wondaland hackers hijack pop culture to drive attention to their impending extinction?

Will a spoonful of sugary pop music help this meditation on our existential threats go down?

You won't be after you read this Gitchie, Gitchie, Ya-Ya Dadaist, tour de farce masterpiece

I am the bags of fat burned off during liposuction. I am the clumps of hair that fall out when bleached and straightened with chemicals. I am the excess cartilage ripped out during nose jobs. I am the puss-filled infections that grow around butt injections. I am the raw nerves that are scraped by veneers. I am the gnarled toes and bunions brought on by years of wearing high-heels. When you see a meteor shoot across the sky, I am the chunks of rock that plummet to earth. I am Stefani Bulsara!

Radio Ga Ga: A Mixtape for the End of Humanity (Paperback)