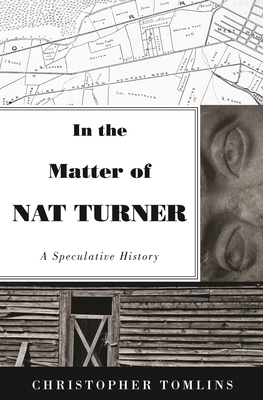 THIS EVENT IS CANCELLED

EAST BAY BOOKSELLERS is excited to welcome Professor Christopher Tomlins to present from his new book, In the Matter of Nat Turner: A Speculative History on Wednesday, March 25th at 7pm. He will be joined in conversation by Dylan C. Penningroth.

In 1831 Virginia, Nat Turner led a band of Southampton County slaves in a rebellion that killed fifty-five whites, mostly women and children. After more than two months in hiding, Turner was captured, and quickly convicted and executed. In the Matter of Nat Turner penetrates the historical caricature of Turner as befuddled mystic and self-styled Baptist preacher to recover the haunting persona of this legendary American slave rebel, telling of his self-discovery and the dawning of his Christian faith, of an impossible task given to him by God, and of redemptive violence and profane retribution.

Much about Turner remains unknown. His extraordinary account of his life and rebellion, given in chains as he awaited trial in jail, was written down by an opportunistic white attorney and sold as a pamphlet to cash in on Turner's notoriety. But the enigmatic rebel leader had an immediate and broad impact on the American South, and his rebellion remains one of the most momentous episodes in American history. Christopher Tomlins provides a luminous account of Turner's intellectual development, religious cosmology, and motivations, and offers an original and incisive analysis of the Turner Rebellion itself and its impact on Virginia politics. Tomlins also undertakes a deeply critical examination of William Styron's 1967 novel, The Confessions of Nat Turner, which restored Turner to the American consciousness in the era of civil rights, black power, and urban riots.

A speculative history that recovers Turner from the few shards of evidence we have about his life, In the Matter of Nat Turner is also a unique

Christopher Tomlins is the Elizabeth Josselyn Boalt Professor of Law at the University of California, Berkeley, and an affiliated research professor at the American Bar Foundation, Chicago. His many books include Freedom Bound: Law, Labor, and Civic Identity in Colonizing English America, 1580-1865 and Law, Labor, and Ideology in the Early American Republic. He lives in Berkeley.

Dylan C. Penningroth specializes in African American history and in U.S. socio-legal history. His first book, The Claims of Kinfolk: African American Property and Community in the Nineteenth-Century South (Chapel Hill: University of North Carolina Press, 2003), won the Avery Craven Prize from the Organization of American Historians. His articles have appeared in the Journal of American History, the American Historical Review, and the Journal of Family History. Penningroth has held fellowships from the National Endowment for the Humanities, the National Science Foundation, and the Stanford Humanities Center, and has been recognized by the Organization of American Historians’ Huggins-Quarles committee, a Weinberg College Teaching Award (Northwestern University), a McCormick Professorship of Teaching Excellence (Northwestern), and a MacArthur Foundation fellowship.

Penningroth is currently working on a study of African Americans’ encounter with law from the Civil War to the modern civil rights movement. Combining legal and social history, the study explores the practical meaning of legal rights for black life. His next project is a study of the legacies of slavery in colonial Ghana.

In the Matter of Nat Turner: A Speculative History (Hardcover)

Virtual Tour of our Sections / Displays (new) [under construction]