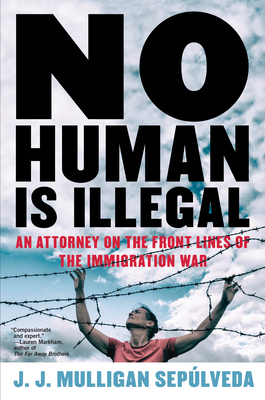 EAST BAY BOOKSELLERS welcomes JJ Mulligan Sepulveda to discuss his new new book No Human Is Illegal, on Thursday, March 21 at 7pm. He will be joined by Lauren Markham.

The perfect author on one of today's hottest topics-- an immigration reform lawyer's journalistic memoir of being on the front lines of deportation.

NO HUMAN IS ILLEGAL is a powerful document of one lawyer's fight for those seeking a better life in America against its ever-tightening borders. For author Mulligan Sepúlveda, the son and husband of Spanish-speaking immigrants, the battle for immigration reform is personal. Mulligan Sepúlveda writes of visiting border detention centers, defending undocumented immigrants in court, and taking his services to JFK to represent people being turned away at the gates during Trump's infamous travel ban.

J. J. MULLIGAN SEPÚLVEDA is an immigration lawyer working at the Immigration Law Clinic at the University of California Davis School of Law. He is a former Immigrant Justice Corps fellow and Fulbright Scholar. This is his first book.

Lauren Markham is a writer based in Berkeley, California. Her work has appeared in VQR, VICE, Orion, Pacific Standard, Guernica, The New Yorker.com, on This American Life, and elsewhere. Lauren earned her MFA in Fiction Writing from Vermont College of Fine Arts and has been awarded Fellowships from the Middlebury Fellowship in Environmental Journalism, the 11th Hour Food and Farming Journalism Fellowship, the Mesa Refuge, and the Rotary Foundation. For the past decade, she has worked in the fields of refugee resettlement and immigrant education.

No Human Is Illegal: An Attorney on the Front Lines of the Immigration War (Hardcover)