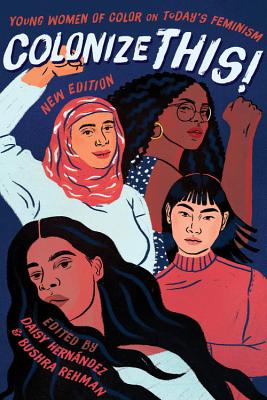 Join us for the first West Coast reading from the NEW edition of Colonize This! Young Women of Color on Today’s Feminism!

Colonize This! Young Women of Color on Today’s Feminism has been described by Ms. Magazine as one of the “100 Best Non-Fiction Books of All Time,” by Vibe  as “13 Books Every Mujerista & Womanist Should Read” and on Buzzfeed as one of 19 Books “On Intersectionality That Taylor Swift Should Read.”

The NEW edition of Colonize This! Young Women of Color on Today’s Feminism! is a protest to the current political regime in our country. It is a response to the deportations of immigrant families, to the relentless killing of black people by police officers, and to the media outlets that describe the abuse of girls by old white men as ‘sexual encounters.’ This book, being as it is a gathering of young women of color sharing their experiences and intellectual insights, stands in defiance of what is happening in the courts, in Washington, and on the streets of our country.

This edition includes nine new essayists, writing on topics from gun violence to trans motherhood; serving as an abortion doula, to organizing migrants; navigating call-out culture as a transgender Latina to challenging rape culture on campus. It is an empowering survey of feminism as practiced by women of color and a clarion call for the next generation. Join us to celebrate the writers in Colonize This! and our collective resistance. Come out to meet the new essayists along with original contributors and editor during this special evening at East Bay Booksellers.

The reading will be followed by book signing.

Lexi Adsit is a fierce, fat, and femme trans latina woman born and raised in the San Francisco Bay Area. She has helped organize groundbreaking projects such as the Queer Yo Mind Conference at San Francisco State University, the International Trans Women of Color Network Gathering, and the first all-trans women of color comedy show Brouhaha. Her writing has been featured on Salon, on Autostraddle, and in the new anthology Trap Door: Trans Cultural Production and the Politics of Visibility. You can find out more about her work and get in touch with her at lexiadsit.com.

Sonia Guiñansaca is an international award winning queer migrant poet, cultural organizer and social justice activist. They emerged as a national leader in the migrant artistic and political communities where they coordinated and participated in groundbreaking civil disobedience actions. Guiñansaca co-founded some of the largest undocumented organizations in the US, including some of the first artistic projects by and for undocumented writers and artists. Sonia has worked for over a decade in both policy and cultural efforts building equitable infrastructures for migrant artists. They have been awarded residencies and fellowships from Voices of Our Nation Arts Foundation, Poetry Foundation, British Council, and the Hemispheric Institute for Performance &amp; Politics. Guiñansaca has performed at the Met, the NYC Public Theater, Lehmann Maupin Gallery and has been featured on PEN American, Interview Magazine, Ms Magazine, Teen Vogue, Diva Magazine UK, and PBS to name a few. Sonia self- published Nostalgia and Borders in 2016, and in 2020 is releasing #PapiFemme and launching Alegria Press, a publishing house for undocumented writers. Soniaguinansaca.com Twitter/IG: @TheSoniaG

Rebecca Hurdis has lived in the Santa Cruz area since 1995.  She left academia in 2014 to become the Executive Director of a residential program for houseless pregnant women.  She returned back to academia as staff in 2018.  She has a teenage daughter and when they are not talking about tik tok, youtube, and thrift store finds, she relentlessly lectures to her on the importance of women of color feminism, intersectionality, and justice and equity.

Darice Jones, aka DJ, based in Oakland, California, is a writer and director. In the mid-2000s,she co published a Bay Area queer zine called PussyTown. Jones completed her first feature film, She Wasn’t Last Night, in 2009. She was able to showcase the black lesbian project internationally to receptive Afri-Queer audiences. Through her small indie film organization Griot Soul Films, she is currently in development on three new projects: Love Letters to Black Children (a short-form web series), Resonance (an Afrofuturist feature fantasy), and The Seven Codes (an urban TV fantasy series). She has also continued her storytelling through novel writing and poetry. In addition to her creative works, DJ is a leadership coach for local community service agencies and a dream-worker offering personal dream interpretations and group dream workshops.

Bhavana Mody lives in Novato, California, where she indulges in hikes and long bike rides in the redwoods and near the Pacific Ocean. For her primary job she teaches elementary school environmental science in English and Spanish at a dual-immersion public school in Napa. Since writing her essay for the first edition of Colonize This!, Bhavana has made several visits to India, deepening her relationships with her extended family and her culture and passionately taking up yoga and meditation. She has been teaching yoga for about fifteen years and is currently training to become a yoga therapist. Perhaps one of the few South Asian yoga teachers in Marin County, Bhavana teaches yoga classes and Indian dance classes, shamelessly claiming her Indian-ness.

Natani Notah is an interdisciplinary artist and educator based in the San Francisco Bay Area. She is an enrolled member of the Navajo Nation (Diné) on her father’s side and part Lakota and Cherokee on her mother’s. Her work has been exhibited at the Holland Project, Reno (2019); Edwin W. Zoller Gallery, Penn State University, University Park (2019); Mana Contemporary, Chicago (2019); Stanford Art Gallery, California (2018); SOMArts Cultural Center, San Francisco (2018); and Root Division, San Francisco (2018). Notah has received awards from the San Francisco Foundation, Art Matters,
and the International Sculpture Center. She has been published in As/Us, Yellow Medicine Review: A Journal of Indigenous Literature, Art & Thought, Sculpture Magazine, Tripwire, and the second edition of Colonize This! Young Women of Color on Today’s Feminism. She has had artist residencies at the Vermont Studio Center and Grounds for Sculpture, she is a 2019–20 affiliate artist at the Headlands Center for the Arts, and she will participate in the Djerassi Resident Artists Program in 2020. Notah holds a BFA with a minor in feminist, gender, and sexuality studies from Cornell University and an MFA in art practice from Stanford University.

Bushra Rehman is a writer and cultural activist. Her poetry collection Marianna’s Beauty Salon is “a love poem for Muslim girls, Queens, and immigrants making sense of their foreign home--and surviving.” Her novel Corona, a dark comedy about being Pakistani-American, was noted by Poets & Writers among the year’s Best Debut Fiction and her co-edited anthology Colonize This! Young Women of Color on Today’s Feminism was chosen as one of Ms. Magazine's &100 Best Non-fiction Books of All Time." Rehman’s first YA novel Corona: Stories of a Queens Girlhood is forthcoming from Tor, an imprint of Macmillan. She is creator of the community-based writing workshop ‘Two Truths and a Lie: Writing Memoir and Autobiographical Fiction.”