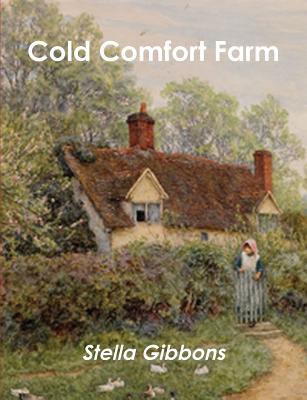 ? Quite simply one of the funniest satirical novels of the last century.?
?Nancy Pearl, NPR's "Morning Edition"
THE DELIRIOUSLY ENTERTAINING "Cold Comfort Farm" is ?very probably the funniest book ever written? ("The Sunday Times," London)?a hilarious parody of D. H. Lawrence's and Thomas Hardy's earthy, melodramatic novels. When the recently orphaned socialite Flora Poste descends on her relatives at the aptly named Cold Comfort Farm in deepest Sussex, she finds a singularly miserable group in dire need of her particular talent? organization.

Stella Dorothea Gibbons, novelist, poet and short-story writer, was born in London in 1902. She went to the North London Collegiate School and studied journalism at University College, London. She then worked for ten years on various papers, including the Evening Standard.Her first publication was a book of poems The Mountain Beast (1930) and her first novel Cold Comfort Farm (1932) won the Femina Vie Heuruse Prize for 1933. Amongst her other novels are Miss Linsey and Pa (1936), Nightingale Wood (1938), Westwood (1946), Conference at Cold Comfort Farm (1959) and Beside the Pearly Water (1954). Her Collected Poems appeared in 1950.In 1933 she married the actor and singer Allan Webb, who died in 1959. They had one daughter. Stella Gibbons died in 1989.

Lynne Truss is a writer and journalist who started out as a literary editor with a blue pencil and then got sidetracked. The author of three novels and numerous radio comedy dramas, she spent six years as the television critic of "The Times of London," followed by four (rather peculiar) years as a sports columnist for the same newspaper. She won Columnist of the Year for her work for Women's Journal. Lynne Truss also hosted Cutting a Dash, a popular BBC Radio 4 series about punctuation. She now reviews books for the Sunday Times of London and is a familiar voice on BBC Radio 4. She lives in Brighton, England.