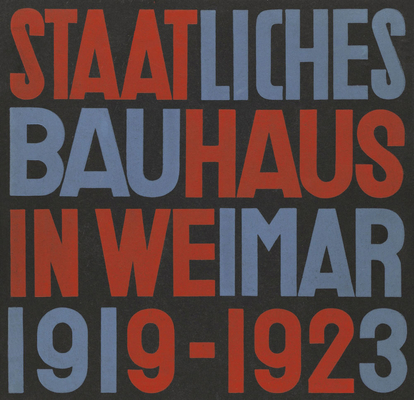 By Lars Muller (Editor), Astrid Bahr (Introduction by), Walter Gropius (Text by (Art/Photo Books))
$85.00
On Our Shelves Now (Please wait for us to confirm and & contact you when it's ready)

The book that introduced the Bauhaus to the world: the 1923 catalog for the landmark first Bauhaus exhibition, now available in a new facsimile edition

In 1919, the state art school in Weimar was reopened as the Bauhaus, under the direction of Walter Gropius and with a radical new teaching approach. Four years later, the first Bauhaus exhibition was held, presenting the school's novel approach to art, design and education to an enthusiastic public locally and internationally.

The catalog Staatliches Bauhaus in Weimar 1919-1923 was published in 1923 to accompany this first public showcase. This survey of the school's transdisciplinary oeuvre put the Bauhaus idea on paper for the first time and gave a sense of its potential. Featuring numerous student and faculty projects, it also describes the theoretical doctrines of Paul Klee, Wassily Kandinsky and Gertrud Grunow, and thus conveys the teaching methods applied in the various workshops. Gropius' preface explains the structure of the state-run Bauhaus and introduces its unique reform program, which called for and taught the unity of technology and art. Illustrations from the various workshops show projects by students, work that is still largely unexplored today. With the original layout by L szl Moholy-Nagy and a cover designed by Herbert Bayer, this expanded facsimile edition of Staatliches Bauhaus in Weimar 1919-1923--published in Lars M ller's XX The Century of Print series--sheds light on the work and aspirations of the Bauhaus from its earliest days. New accompanying commentary places this momentous publication, long out of print, in its historical context, documenting the Bauhaus from initial idea to the standing it would attain as a preeminent school of art and design. In this edition, the German facsimile is accompanied by the first full English translation of the catalog, making it newly accessible to an international audience.