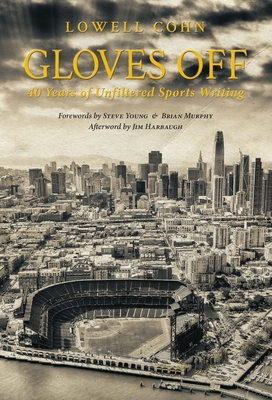 By Lowell Cohn, Brian Murphy (Foreword by), Jim Harbaugh (Afterword by)
$26.95
On Our Shelves Now (Please wait for us to confirm and & contact you when it's ready)

After forty years inside the press box delivering unique perspectives on the biggest stars, events, and storylines in sports, former San Francisco Chronicle and Press Democrat columnist Lowell Cohn has seen it all. From wild locker room conflicts to bizarre player interviews to heartfelt conversations with the heroes of the athletic world, Cohn has spent decades bringing to life the narratives of sports through his masterfully crafted newspaper columns. Now you can go directly into the locker room with Cohn. This unparalleled collection of anecdotes and interactions reveals Cohn's insider perspective and unvarnished opinions on some of the sports world's most well-known personalities, including Bill Walsh, Barry Bonds, Michael Jordan, Sugar Ray Robinson, Steve Young, and many more. Freed from the prohibitions of traditional reporting, Cohn's tell-all book takes in you into the rarified world of sports that you can't see from the confines of your newspaper.

Lowell Cohn was a sports columnist for the Santa Rosa Press Democrat and San Francisco Chronicle. He has been published in Sports Illustrated and the New York Times, and was Sports Columnist of the Year in the San Francisco Bay Area eight times. He lives in Oakland, California, with his wife. Brian Murphy is the co-host of the 'Murph and Mac' morning show on KNBR 104.5/680, The Sports Leader, in San Francisco. Prior to joining KNBR in 2004, Murphy was a sportswriter at the San Francisco Chronicle, San Francisco Examiner, Santa Rosa Press Democrat, and Los Angeles Times. Jim Harbaugh is the head coach of the University of Michigan football team. He played fourteen seasons as a quarterback in the NFL, earning a Pro Bowl appearance in 1995, before going on to coach at both the college and professional level, including four seasons as head coach at Stanford and four seasons as head coach of the San Francisco 49ers. Steve Young is a retired Hall of Fame NFL quarterback. He spent most of his fifteen-year career with the San Francisco 49ers, winning three Super Bowls and two MVP awards, as well as being named to seven Pro Bowls. He currently lives in Palo Alto, California.