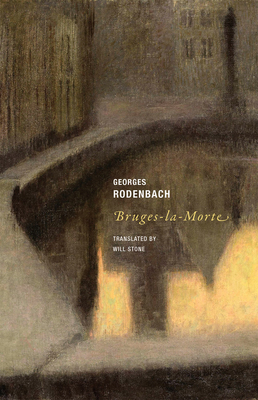 The archetypal Symbolist novel, and a gorgeous tapestry of death and melancholy, Bruges-la-Morte was also the first work of fiction to employ photographs in the style of Breton, Drndic and Sebald

A widower, Hugues Viane, takes refuge in the decay of Bruges, living among the relics of his dead wife as he transforms his home and the very city he inhabits into her spatial embalmment. Spinning out his existence in a mournful, silent labyrinth of entombed streets and the cold arteries of canals, Viane takes comfort in his narcissistic delirium, until his world is shaken by the appearance of his wife's doppelganger: a young dancer encountered in the street, whose appearance conjures a sequence of events that will introduce the specter of reality into his ritualist dream-state to disastrous effect.
The archetype of the Symbolist novel, Bruges-la-Morte, first published in 1892, remains Georges Rodenbach's most famous work; it has seen numerous cinematic and operatic adaptations, and inspired the source material for Alfred Hitchcock's Vertigo. It was also a precursor to such authors as Andr Breton and W.G. Sebald in being the first novel to employ photographs as illustrations--to allow readers, as Rodenbach put it, to "be subject to the presence of the town, feel the contagion of the neighboring waters, sense in their turn the shadow of the high towers reaching across the text."
Georges Rodenbach (1855-98) was one of the major figures of Belgian Symbolism, an essential bridge between the Belgian and Parisian literary scenes, and a friend and colleague of Verhaeren, Maeterlinck, Mallarm and Huysmans. He was the author of four novels, eight collections of verse and numerous short stories, plays and critical works.