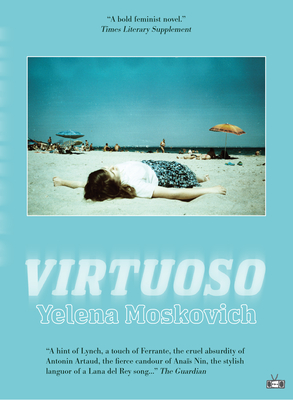 By Yelena Moskovich
$16.99
On Our Shelves Now (Please wait for us to confirm and & contact you when it's ready)

*Longlisted for the Swansea University Dylan Thomas Prize
"A hint of Lynch, a touch of Ferrante, the cruel absurdity of Antonin Artaud, the fierce candour of Ana's Nin, the stylish languor of a Lana del Rey song." --The Guardian

As Communism begins to crumble in Prague in the 1980s, Jana's unremarkable life becomes all at once remarkable when a precocious young girl named Zorka moves into the apartment building with her mother and sick father. With Zorka's signature two-finger salute and abrasive wit, she brings flair to the girls' days despite her mother's protestations to not "be weird." But after scorching her mother's prized fur coat and stealing from a nefarious teacher, Zorka suddenly disappears.

Meanwhile in Paris, Aim e de Saint-P married young to an older woman, Dominique, an actress whose star has crested and is in decline. A quixotic journey of self-discovery, Virtuoso follows Zorka as she comes of age in Prague, Wisconsin, and then Boston, amidst a backdrop of clothing logos, MTV, computer coders, and other outcast youth. But it isn't till a Parisian conference hall brimming with orthopedic mattresses and therapeutic appendages when Jana first encounters Aim e, their fates steering them both to a cryptic bar on the Rue de Prague, and, perhaps, to Zorka.

With a distinctive prose flair and spellbinding vision, Virtuoso is a story of love, loss, and self-discovery that heralds Yelena Moskovich as a brilliant and one-of-a-kind visionary.

Yelena Moskovich was born in Ukraine (former USSR) and emigrated to Wisconsin with her family as Jewish refugees in 1991. She studied theatre at Emerson College, Boston, and in France at the Lecoq School of Physical Theatre and Université Paris 8. Her plays and performances have been produced in the US, Canada, France, and Sweden. She has also written for Vogue, Frieze Magazine, The Paris Review, Times Literary Supplement, New Statesman, Happy Reader, Mixte Magazine, the Skirt Chronicles, and Dyke_on Magazine. She is the winner of the 2017 Galley Beggar Press Short Story Prize. In 2018, she served as a curator and exhibiting artist at the Los Angeles Queer Biennial. Her first novel The Natashas was published in 2016. She lives in Paris.