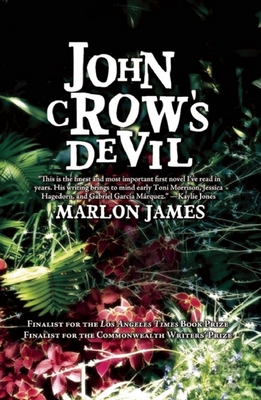 “Marlon James’ debut novel is the first sign of the literary genius the Booker judges would later recognize in A Brief History of Seven Killings. James summons into being the Jamaican village of Gibbeah, a community scourged by the conflict between two rival preachers. With its rich language and biblical cadence, John Crow’s Devil is a Miltonic epic of unrelenting spiritual darkness, but, with James’ ear for dialogue and knack for earthy humor, it flashes with light on a human level.”
— James Crossley, Phinney Books, Seattle, WA

A powerful first novel...Writing with assurance and control, James uses his small-town drama to suggest the larger anguish of a postcolonial society struggling for its own identity.
--New York Times Book Review, Editors' Choice

A Brief History of Seven Killings might have won the Booker, and Black Leopard, Red Wolf might be the next Game of Thrones, but if you're looking for an entry point into the much-lauded, highly raucous mind of Marlon James, his 2005 debut could actually be the place to start: it's just as powerful and intricately written as James's later works, but it's quite a bit shorter, and easier to carry around with you everywhere you go, something you will surely want to do.
--Literary Hub, 10 Debut Novels Nobody Reads Anymore--But Should

A mesmerizing treatise on the nature of good and evil, faith and madness, guilt and forgiveness, eloquently captured in a microcosm of society.
--Booklist

John Crow's Devil engages the political legacy of Frantz Fanon without sacrificing the power of fiction...There's a temptation to compare John Crow's Devil to novels by Toni Morrison or Earl Lovelace, among others, and there are certainly similarities to those works in this one. There is even an echo of Faulkner in the meticulous, multi-vocal rendering of conflicts entrenched in village life. But more important than any comparison is that James' debut is very much its own book, and stands as tall on its own as it would with any other volume beside it.
--Small Spiral Notebook

This stunning debut novel tells the story of a biblical struggle in a remote Jamaican village in 1957. With language as taut as classic works by Cormac McCarthy, and a richness reminiscent of early Toni Morrison, Marlon James reveals his unique narrative command that will firmly establish his place as one of today's freshest, most talented young writers.

In the village of Gibbeah--where certain women fly and certain men protect secrets with their lives--magic coexists with religion, and good and evil are never as they seem. In this town, a battle is fought between two men of God. The story begins when a drunkard named Hector Bligh (the Rum Preacher) is dragged from his pulpit by a man calling himself Apostle York. Handsome and brash, York demands a fire-and-brimstone church, but sets in motion a phenomenal and deadly struggle for the soul of Gibbeah itself. John Crow's Devil is a novel about religious mania, redemption, sexual obsession, and the eternal struggle inside all of us between the righteous and the wicked.