The Fabulous Flotilla: Scotland's Adventure on the Rivers of Burma (Paperback) 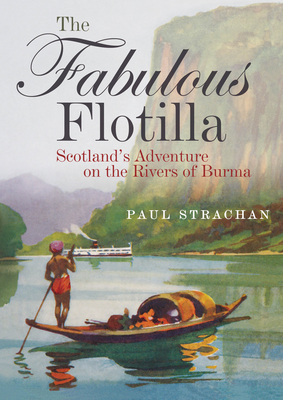 The 'Fabulous Flotilla', called the Irrawaddy Flotilla Company in colonial Burma, was the largest privately-owned fleet of ships in the world. It was an entirely Scottish enterprise with nearly all its investors, management and ship's officers drawn from Scotland. Over 1,200 ships were ordered mainly from Clyde yards and each year carried the majority of the population of Burma on its river network without loss of life. The paddle steamers were amongst the largest in the world, innovative in design and technology, and very beautiful. The flotilla began as a naval task force in the 1820s, was commandeered in five wars, and was to end its life with the British evacuation of Burma in 1942, the greatest evacuation in British military history. Fascinating personalities emerge from Strachan's descriptions of Irrawaddy commanders and the flotilla's key players. The ships evolved over a hundred years into riverine versions of ocean liners with plush cabins, restaurants, shops and even post offices on board. The largest class of ships carried 5,000 passengers including royalty, celebrities of the day and famous writers like Somerset Maugham along with early tourists and big game hunters.In the second part of the book, the author who himself has spent much of his life running ships on the rivers of Burma, takes us on a journey 1,000 miles upriver to explore the different regions of the country often highlighting Scottish connections. The river is the thread through which Burma's often tragic history, yet rich and glorious Buddhist culture, flows and only on a river journey can the country be understood.Renamed Myanmar in 1997, Burma is Scotland's 'lost colony' and the Scottish connection is little remembered today due to Burma's half a century of post-war isolation. In its 1920s heyday Burma had the highest concentration of Scots anywhere in the world, outside of Scotland, with the exception of Canada. Scots were everywhere in Burma, running everything, and even their Burmese servants spoke in 'broad' Scots. With the 'opening up' of Burma in the early 21st century the Irrawaddy watershed, where about 50 million people live in a primitive rural economy, is under threat. Deforestation on a vast scale has resulted in the silting up of once navigable channels. China, with its 'belt and road' system that is a euphemism to a recolonisation of the country, plans to build one of the world's largest dams in the river's headwaters that would devastate the country's agriculture and fisheries. The Fabulous Flotilla provides a revealing record of this remarkable era in Burma's history and past Scottish endeavour - a jewel of a story that may soon be lost.

Paul Strachan comes from a long line of Glasgow shipbuilders and first visited Burma in 1981 to work for a Scottish company building power stations there. In 1995 he revived the Irrawaddy Flotilla Company and restored an original Clyde-built steamer, a story he tells in The Pandaw Story. He has written books about the Buddhist temples of ancient Pagan and living and travelling in Burma in the 1980s.Author hometown: Perth