The Rest Is Slander: Five Stories (The German List) (Hardcover) 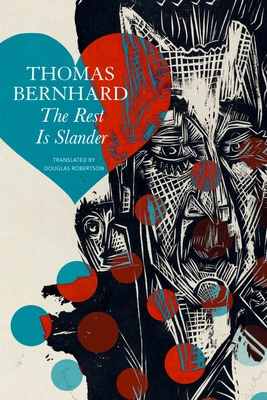 A collection of previously untranslated stories from a master of twentieth-century Austrian literature, Thomas Bernhard.

“The cold increases with the clarity,” said Thomas Bernhard while accepting a major literary prize in 1965. That clarity was the postwar realization that the West’s last remaining cultural reference points were being swept away by the ever-greater commodification of humankind. Collecting five stylistically transitional tales by Bernhard, all of which take place in sites of extreme cold, this volume extends that bleak vision of the master Austrian storyteller.

In “Ungenach,” the reluctant heir of an enormous estate chooses to give away his legacy to an assortment of oddballs as he discovers the past of his older brother, who was murdered during a career in futile colonialist philanthropy. In “The Weatherproof Cape,” a lawyer tries to maintain a sense of familial solidarity with a now-dead client with the help of an unremarkable piece of clothing. “Midland in Stilfs” casts a jaundiced eye on the laughable efforts of a cosmopolitan foreigner to attain local authenticity on a moribund Alpine farmstead. In “At the Ortler,” two middle-aged brothers—one a scientist, the other an acrobat—meditate on their unusual career paths while they climb a mountain to reclaim a long-abandoned family property. And in “At the Timberline,” the unexpected arrival of a young couple in a mountain village leads to the discovery of a scandalous crime that casts a shadow on the personal life of the policeman investigating it.

Thomas Bernhard (1931–89) grew up in Salzburg and Vienna, where he studied music. In 1957 he began a second career as a playwright, poet, and novelist. He went on to win many of the most prestigious literary prizes of Europe, including the Austrian State Prize, the Bremen and Brüchner prizes, and Le Prix Séguier.

Douglas Robertson is a translator based in Baltimore, Maryland. He has translated many works from German into English, and he has studied Thomas Bernhard’s work for over ten years.