Intent to Deceive: Denying the Genocide of the Tutsi (Hardcover) 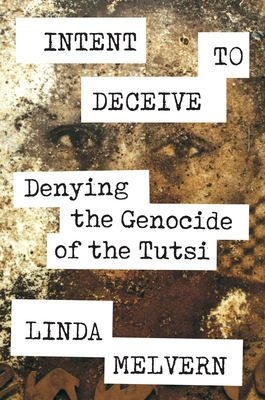 By Linda Melvern
$26.95
On Our Shelves Now (Please wait for us to confirm and & contact you when it's ready)

A shocking exposé of genocide denial

It is twenty-five years since the 1994 genocide of the Tutsi of Rwanda when in the course of three terrible months more than 1 million people were murdered. In the intervening years a pernicious campaign has been waged by the perpetrators to deny this crime, with attempts to falsify history and blame the victims for their fate. Facts are reversed, fake news promulgated, and phoney science given credence.

Intent to Deceive tells the story of this campaign of genocide denial from its origins with those who planned the massacres. With unprecedented access to government archives including in Rwanda Linda Melvern explains how, from the moment the killers seized the power of the state, they determined to distort reality of events. Disinformation was an integral part of their genocidal conspiracy. The génocidaires and their supporters continue to peddle falsehoods. These masters of deceit have found new and receptive audiences, have fooled gullible journalists and unwary academics. With their seemingly sound research methods, the Rwandan génocidaires continue to pose a threat, especially to those who might not be aware of the true nature of their crime.

The book is a testament to the survivors who still live the horrors of the past. Denial causes them the gravest offence and ensures that the crime continues. This is a call for justice that remains perpetually delayed.

Linda Melvern is a British investigative journalist. For several years she worked for The Sunday Times (UK), and was recruited from the newsroom to join the investigative Insight Team. Since leaving newspapers she has written six books of non-fiction and has published in the British press and academic journals. For twenty-five years she has research and written extensively about the circumstances of the 1994 genocide in Rwanda. A consultant to the Military One prosecution team at the International Criminal Tribunal for Rwanda, part of her archive of documents was used to show the planning, the financing and progress of the crime. She is the author of A People Betrayed: The Role of the West in Rwanda’s Genocide, and Conspiracy to Murder.

“Exposes wilful deception—on the part of countries and individuals with everything to lose—to manipulate the next generation into revisionists and genocide deniers. These duped academics, journalists and other ‘experts’ continue to propagate self-serving lies onto the victims, aiming to wreak damage as repugnant as that of the earliest colonialists. Her book does not delve in gossip-mongering, hearsay or bias. It presents the facts. And it behoves us every one to remember them. It is our moral imperative. In Intent to Deceive, Melvern clearly and concisely details the indisputable evidence of a planned genocide.”
—Lt. General Rome Dallaire,, Globe and Mail

“Exposes how genocide deniers have crafted an alternative history of the Rwandan genocide. This first exhaustive analysis of the history of Tutsi genocide denial is an essential resource which helps guide readers through the labyrinth of literature on Rwanda’s history.”
—The Africa Report

“Linda Melvern has made it something of a life mission to take on the Rwandan genocide deniers and debunk their poisonous fact-muddying claims … A clear, crisp and important contribution to the literature on the genocide. In particular Melvern forensically rebuts attempts by apologists for the genocidaires, including western academics, to suggest a moral equivalence between the parties in Rwanda.”
—Alec Russell, Financial Times

“A brilliant and incisive book about those who continue to deny the 1994 genocide against the Tutsi in Rwanda.”
—Simon Adams, Executive Director of the Global Centre for the Responsibility to Protect

“A scathing indictment of those ‘experts’ who feed off of each other’s bias and persistently ignore (and perhaps even benefit from) the lack of reflexivity on and awareness of the harm done by Western-centred knowledge on Rwanda. She shows how most of the knowledge and expertise on Rwanda disproportionately favours non-Rwandan voices, along the way distorting the experiences of survivors and victims and ignoring the expertise of Rwandans altogether.”
—Alice Musabende, Wasafiri