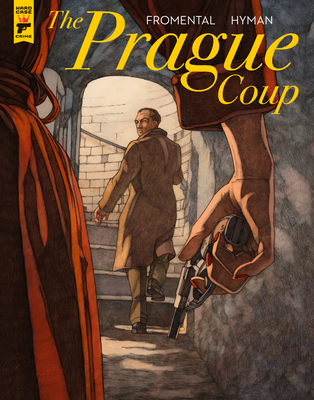 Author Graham Greene finds himself in the midst of an intricate plot to unseat the government of Czechoslovakia in an event that would be remembered as The Prague Coup.

Winter 1948, the Czech capital is under occupation by the allied powers. Debriefed by London Films, Graham Greene works on the writing of his next feature film, assisted by the enigmatic Elizabeth Montagu. A seemingly peaceful mission enters into a revolution that history will remember as the "coup de Prague".

Jean-Luc Fromental is a veteran writer responsible for more than 30 novels, travel stories and comics.

Miles Hyman lives between France and the United States. He has exhibited at leading galleries around the world. Born in Bennington, Vermont in 1962, Miles Hyman studied painting at Buxton School in Williamstown, Massachussets, then engraving at Wesleyan University and drawing at the Ecole des Beaux-Arts in Paris. His works have been published in major newspapers like Le Monde, Libération, New Yorker Magazine, The Boston Globe and The New York Times. His pastel paintings are exhibited in Paris, Geneva, Brussels and Barcelona.

"A masterpiece of intrigue ... by mixing fact and fiction with a surefooted ease that would make bestselling authors weep with jealousy, Fromenthal keeps his audience guessing right up until the closing moments" - Tripwire

“The Prague Coup reminds readers that sometimes writers lived lives more interesting than the ones they created in their novels.“ - New York Journal of Books

"One of those graphic novels that demonstrate what an intelligent art form this has become ... an intriguing, speculative Cold War thriller that has both plausibility and gravitas" - NB Magazine

"A stellar retelling of the effort and espionage that went into making one of the cinema’s greatest spy tales. 10 out of 10!"   - Newsarama

"Intellectually engaging, beautifully observed and memorable, a fitting companion to Greene’s own work. He’d probably appreciate it" - Slings and Arrows