The Mask of Sanity (Paperback) 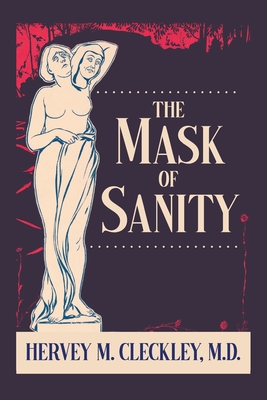 The Mask of Sanity: An Attempt to Clarify Some Issues About the So-Called Psychopathic Personality is a foundational work on the nature and diagnosis of psychopathy by Dr. Harvey M. Cleckley. This landmark work explores the psychopath's ability to hide their illness and function "normally" in public when it serves their ends. This ability to slip on the "mask" makes identification and diagnoses of these individuals extremely difficult.

Dr. Hervey M. Cleckley (1903-1984) was a professor of psychiatry and neurology at the University of Georgia School of Medicine. As the psychiatric consultant at the Veterans Administration Hospital in Augusta and the Camp Gordon Army Hospital, he had ample opportunities to observe and treat men suffering from war-related trauma like post-traumatic stress disorder.

He wrote several books on psychiatry, including The Three Faces of Eve with Dr. Corbett H. Thigpen. This book is a case study on a patient with a rare diagnosis of multiple personality disorder. It was later made into a film of the same name. Actress Joanne Woodward won an Academy Award for Best Actress for her portrayal of Eve's three personalities. Dr. Cleckley was also a consultant for the prosecution in the 1979 trial of Ted Bundy.

Dr. Cleckley's best-known work is The Mask of Sanity, first published in 1941. This printing is the second edition, published in 1950. The work was revised several times across four decades, as additional research and new subjects increased his knowledge of the subject.

The title refers to the mask that the psychopathic personality is able to apply in everyday situations, in order to achieve their ends or get themselves out of trouble. While other manifestations of mental illness are uncontrollable and involuntary, the psychopath is able to conceal theirs when it suits their purpose.

To add to the complication, many people in the beginning stages of their psychosis behave normally most of the time, only occasionally exhibiting symptoms of aberrant behavior. Identifying the difference between the occasional bout of poor judgment and a personality disorder is strikingly difficult in these early stages. After all, writes Cleckley, "Do we not...have to admit that all of us behave at times with something short of rationality and good judgment?"

Yet another difficulty arises among psychiatrists in the definition and classification of the term "psychopath." Definitions are inconsistent across practices, and they do not coincide with the way the term is used in clinical practice. With a broad definition and no consistency in its use, how are psychiatrists to identify and treat psychopaths?

A large part of the book consists of the dramatic stories of 13 individuals that Cleckley had the opportunity to study in his clinical work. Through these stories, he explores the characteristics that are shared among psychopaths. He also describes six "incomplete manifestations of the disorder," assigning each an archetype such as the Businessman, the Gentleman, or the Scientist.

To aid in the identification of the pathology, he created a profile of 16 characteristics of the psychopath. These include behaviors like "lack of remorse or shame" and "superficial charm." Dr. Cleckley theorized that there are more undiagnosed psychopaths than doctors had ever known, and hoped that this work would help them to be more easily identified.

The Mask of Sanity is one of the most influential works on psychopathy of the 20th century. While it does not include treatment recommendations, it has served as a foundation for the therapies and behavioral skills training now used to treat the disorder.