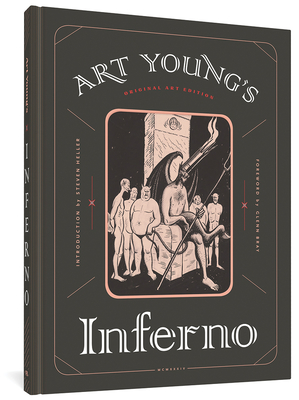 The preeminent American political cartoonist's classic reinterpretation of Dante's Inferno as a satirical indictment of capitalism — as it has never been seen before.

Capitalist oligarchs and their minions have been condemned to Hell, but they lead a hostile takeover, throw out Satan, and privatize the Inferno. Operated by a corporate monopoly who maximizes profits and misery, Hell has become the perfect capitalist paradise. Fantagraphics, the premier publisher of cartoon art, presents each page of Young's art scanned from the original and reproduced in full color. His brushstrokes are clearly visible and this artwork appears as it did on his drawing board. This edition also includes the original 1934 essays by Young and his "friend, admirer, and attorney" Charles Recht, a foreword by acclaimed graphic designer Steven Heller, and an introduction by art collector and documentarian Glenn Bray.

Art Young was an American political cartoonist and writer who was born in 1866 and died in 1943. He attended the Chicago Academy of Design, the Art Students League of New York, and the Academie Julian. Young is most known for his contributions to the radical socialist magazine The Masses.

Steven Heller is an authority on graphic design, so much so that the AIGA's Cultural Commentary prize is in his name.

Young was of his time, ahead of his time, and timeless in terms of conceptual acuity and pictorial savvy. Nothing proves this better than this superb new edition of his 1934 classic.
— Print Magazine

Political cartoons usually have the shelf life of yogurt, yet many of Art Young's drawings from the early twentieth century remain fresh and hilariously witty.
— The New Yorker

Young's art remains timeless. With his help, we can keep laughing far into the future. It may be our only hope.
— Times Literary Supplement

Published at a time when political rancor overwhelms nearly every other conversation, [Young's work] is a welcome reminder of how poignant, elegant and, yes, funny a historic political cartoon can be.
— Chicago Tribune

Young's social commentary seeks to punish the abusively wealthy in the here and now. His pen, whether drawing or printing, is filled with the same critical wit.
— PopMatters

Young's meticulous line, ingenious shading, and inventive figure drawing [depicts] a hell that chills you to the bone even as you can’t help but laugh at it. ... The entire journey is something to behold.
— Solrad