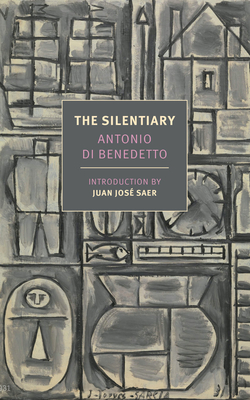 In post-WWII South America, a struggling writer embarks on a murderous thought experiment to help kickstart his career in this next tale of longing from the author of Zama.

The Silentiary takes place in a nameless Latin American city during the early 1950s. A young man employed in middle management entertains an ambition to write a book of some sort. But first he must establish the necessary precondition, which the crowded and noisily industrialized city always denies him, however often he and his mother and wife move in search of it. He thinks of embarking on his writing career with something simple, a detective novel, and ponders the possibility of choos- ing a victim among the people he knows and planning a crime as if he himself were the killer. That way, he hopes, his book might finally begin to take shape.

The Silentiary, along with Zama and The Suicides, is one of the three thematically linked novels by Di Benedetto that have come to be known as the Trilogy of Expectation, after the dedication “To the victims of expectation” in Zama. Together they constitute, in Juan José Saer’s words, “one of the culminating moments of twentieth-century narrative fiction in Spanish.”

Antonio Di Benedetto (1922–1986) was an Argentine journalist and the author of five novels, the most well known being Zama, which is available from NYRB Classics. His first book, the story collection Mundo Animal, appeared in English translation in 1997 as Animal World.

Juan José Saer (1937–2005) was considered one of the most important Latin American authors to come after Jorge Luis Borges. He wrote several novels, a few of which are available in English, including The Regal Lemon Tree and The Witness.

Esther Allen received the 2017 National Translation Award for her translation of Antonio Di Benedetto's Zama. Co-founder of the PEN World Voices Festival in New York City, she teaches at City University of New York's Graduate Center and Baruch College, where she directs the Sidney Harman Writer-in-Residence Program. In 2006 the French government named her a Chevalier of the Order of Arts and Letters.

"The Silentiary is an urban novel, but the city manifests almost exclusively through sound, which tortures the narrator with its crushing omnipresence. . . . Agency and its destruction is The Silentiary’s, indeed the entire Trilogy of Expectation’s, central drama: What can an individual do against the abstract and inescapable exhaustion of the present? . . . Di Benedetto was a poet of individuals in conflict with the historical conditions into which they were born, infected with a will to live that they could only resent." —Federico Perelmuter, The Baffler

"Blending the futility of Kafka’s surveyors with the inner turmoil of Dostoyevsky’s underground men, Di Benedetto’s martyrs of deferment await a deliverance that never comes. Their lives—inert, almost parenthetical—offer up the psychological extremity of stasis. Madness, obsession, and terminal lassitude hang in equipoise from his subtle systems of narrative suspension. . . . Di Benedetto’s lean, existential fictions have always dramatized the impossibility of living. . . . Di Benedetto’s strange, austere book of foiled escapes and delicate cruelties glows with a lunar abstraction." —Dustin Illingworth, The Nation

"Di Benedetto recasts the major conflict of the modern world as a war between noise and silence with this sly treatise on an individual’s attempts to remain sane in a city where his consciousness is frequently set off-kilter, 'in defiance of any lunatic who might pretend otherwise.' The result is existential, nervy, and crisply imagined." —Publishers Weekly

"The Silentiary is the second book in what is known as di Benedetto’s Trilogy of Expectation, following Zama, a mordant chronicle of inaction set in a tedious 18th-century backwater of colonial South America. The books have a spiritual kinship with Samuel Beckett’s postwar trilogy of monologue novels in their deadpan rendering of comic futility and monomania." —Sam Sacks, The Wall Street Journal

“Di Benedetto writes in sharp, modern, deceptively simple prose . . . he was a bridge between Jorge Luis Borges, with his mental labyrinths, and Roberto Bolaño, a peripatetic Chilean whose work explored both the condition of the writer and chronic violence in Latin America.” —Michael Reid, The Economist

“[The Silentiary] calls to mind Kafka’s pregnantly indecipherable novels, but Di Benedetto fills out his quasi-allegorical premise with so many dingy particulars that his narrator seems to experience his universal problem, in what may be the universal way, as a private shame and defeat.” —Benjamin Kunkel, The New Yorker