University of the Jazz Messengers: Art Blakey's Passwords to the Mystery of Creating Art and Universal Success. (Paperback) 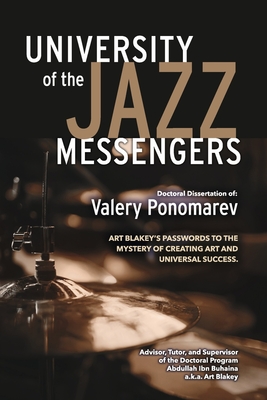 This book introduces the reader to the wisdom of Art Blakey's teaching through his quotes and reaching into the deepest grotto of the meaning of each one of them.
I see the need for this book at every gig, whether I play or sit at a club and listen. Every concert, rehearsal, every time I deal with musicians, hear them talk, make announcements, conduct themselves on stage etc. Professional ones, not only students. Brilliant players, but, almost always, lacking the knowledge of the Art Blakey's Teachings. I see it right away.
This book is intended to give the novice who has just embarked on the road of learning to play melodies, scales, chords, fast runs and trills, play in all sorts of bands etc., exposure to many "codes" and "keys" which spell out what is beyond the "obvious", to what he or she will be really dealing with, some for awhile, some will be dealing with it for a long time. Some, all their lives. Once understood, practiced and applied on stage in front of a live audience, these "codes" will serve as an invaluable guiding light. A source of confidence and an inspiration on the way to a close encounter with the mystery of creating Art, playing Music.
Art Blakey & the Jazz Messengers Modus Operandi. The "codes/keys" revealed in this book will make a lot of sense to any reader, not only musicians, but particularly to Jazz musicians, because they come from Art Blakey himself. One of the greatest personalities in jazz, drummers, band leaders and educators in the history of this music, who in turn learned his craft from the greatest jazz musicians preceding him.
Jazz Messenger Valery Ponomarev

Jazz trumpeter Valery Ponomarev was born in Russia and came to the U.S. in 1973. He has been an American citizen since 1979, and has worked with Art Blakey & the Jazz Messengers for four years. With the Messengers, he performed at major concert halls, clubs, and festivals all over the world and recorded 11 albums. He also made numerous television appearances with the Messengers in Europe, Japan, and Brazil. In the United States, he has made television appearances on "To Tell the Truth," on the PBS network, National Geographic Today, and CNN.
The long list of jazz luminaries Mr. Ponomarev performed, traveled and recorded with, in addition to Art Blakey and The Jazz Messengers, includes super stars of modern jazz such as: Benny Golson, Max Roach, Joe Henderson, Jimmy Cobb, Don Braden, Curtis Fuller, Charles McPherson, Mark Gross, the Duke Ellington Orchestra under Mercer and Paul Ellington, the Arturo O'Farril Afro Cuban Jazz Big Band and many others.
He recorded eight solo albums, most of which originally were rated at top billing. His first book "On the Flip Side of Sound" has generated numerous very favorable comments and reviews by the absolute best in music business. The 52-minute documentary "Trumpeter from Russia", after this book, was awarded the Gold Remi Aword at the 2011 Houston, TX International Film Festival. His life is also documented in short films "Messenger from Russia" and "Frozen in Amber".
In addition to playing with his quintet, Mr.Ponomarev leads and writes for his big band VPJBB a.k.a. "Our Father Who Art Blakey". The VPJBB performed at Dizzy's, Iridium, Jazz Standard, and other venues in NYC and appears regularly at the legendary "Zinc Bar" in the Village. The band's CD featuring Benny Golson accumulated numerous well-minded and raving reviews. It also made the list of the best recordings of 2016.
Valery Ponomarev Big Band: Our Father Who Art Blakey : The Centennial – Summit Records. Release date January 17/2020. Reviews are being posted on Mr. V.Ponomarev's FaceBook page as they appear in the press.
The most typical comment: And I give all the credit to Valery for his excellent writing and keeping the Messengers' spirit alive and well.