Anna Politkovskaya: No to Fear (They Said No) (Hardcover) 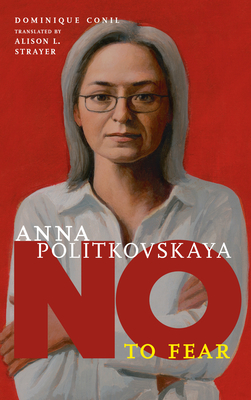 The deeply researched and partly imagined story of the fearless, internationally recognized journalist who was assassinated for believing that ‘words can save lives.’

Say No to Fear, part of the They Said No series of histories, tells the story of Anna Politkovskaya’s courageous life narrated from the perspective of her longtime mentor and friend, the dissident writer Vassily Pachoutinsev. From their first meeting when she was a young literature student writing about poet Marina Tsvetaeva to her rise as an internationally recognized journalist, through Vassily we see Anna develop from junior reporter, to covering social issues after the fall of the Soviet Union, to becoming a fearless defender of human rights. Throughout the author brings the history to life by including key conversations that might have happened between them at pivotal moments in Politkovskaya’s life.
A scathing critic of the second Chechen war, Politkovskaya published most of her political work while working at the Novaya Gazeta, a newspaper at the forefront of the fight for free expression in Russia. For their outspokenness several members of its staff were murdered, presumably silenced by Russia's Vladimir Putin and Chechen leader Ramzan Kadyrov. Even after a poisoning attack and a mock execution, Politkovskaya persisted, adamant in her fight for her children's and grandchildren’s world, critiquing the situation in Chechnya and Putin until her assassination in 2006.
The narrator, Pachoutinsev, explains how her legacy lives on, inspiring those in pursuit of justice and the truth both in Russia and abroad.

As a journalist Dominique Conil has for more than a decade reported primarily on Russia and the Aral Sea as well as reporting on prisons with the newspaper Libération. She regularly collaborates with Michel Butel's L'Autre Journal and, subsequently, with L'Événement du Jeudi, DS Magazine, L'Humanité (major reportages) and the Cosmopolitaine program on France Inter radio.
In 2008 she received the Inédit Acts-Sud-Le Monde award for her novel Hope for the War published by Actes Sud. She maintains a blog on the online daily Mediapart, for which she has also been a literary critic since 2011.
Alison L. Strayer is a Canadian writer and translator. She won the Warwick Prize for Women in Translation, and her work has been shortlisted for the Governor General's Award for Literature and for Translation, the Grand Prix du livre de Montreal, the Prix littéraire France-Québec, and the Man Booker International Prize. She lives in Paris.

"'The opposite of despair is not hope,' [Mordechai] Anielewicz famously said. 'It’s struggle.' That’s an apt description of the They Said No series, whose stated mission is to demonstrate 'the importance of standing up for what you know is right.' Perhaps, if these books rally enough young activists to say no to fear and despair, future Politkovskayas and Anielewiczes will be able to lead long and happy lives."
--Alan Gratz, New York Times Book Review