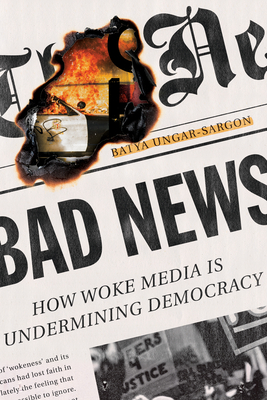 Something is wrong with American journalism. Long before "fake news" became the calling card of the Right, Americans had lost faith in their news media. But lately, the feeling that something is off has become impossible to ignore. That's because the majority of our mainstream news is no longer just liberal; it's woke. Today's newsrooms are propagating radical ideas that were fringe as recently as a decade ago, including "antiracism," intersectionality, open borders, and critical race theory. How did this come to be?

It all has to do with who our news media is written by--and who it is written for. In Bad News: How Woke Media Is Undermining Democracy, Batya Ungar-Sargon reveals how American journalism underwent a status revolution over the twentieth century--from a blue-collar trade to an elite profession. As a result, journalists shifted their focus away from the working class and toward the concerns of their affluent, highly educated peers. With the rise of the Internet and the implosion of local news, America's elite news media became nationalized and its journalists affluent and ideological. And where once business concerns provided a countervailing force to push back against journalists' worst tendencies, the pressures of the digital media landscape now align corporate incentives with newsroom crusades. The truth is, the moral panic around race, encouraged by today's elite newsrooms, does little more than consolidate the power of liberal elites and protect their economic interests. And in abandoning the working class by creating a culture war around identity, our national media is undermining American democracy. Bad News explains how this happened, why it happened, and the dangers posed by this development if it continues unchecked.

Batya Ungar-Sargon is the deputy opinion editor of Newsweek. Before that, she was the opinion editor of the Forward, the largest Jewish media outlet in America. She has written for the New York Times, the Washington Post, Foreign Policy, Newsweek, the New York Review of Books Daily, and other publications. She has appeared numerous times on MSNBC, NBC, the Brian Lehrer Show, NPR, and at other media outlets. She holds a PhD from the University of California, Berkeley.