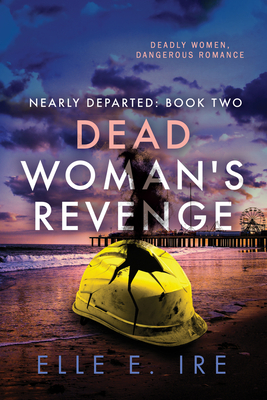 This is book number 2 in the Nearly Departed series.

Flynn Dalton doesn’t want to be a hero. But for Genesis, she’ll do whatever it takes.

After her first, deadly brush with the paranormal, Flynn just wants to get back to her life: construction work, semiprofessional bowling, and her fiancée, Genesis. Unfortunately, Flynn’s abilities have caught the attention of the National Psychic Registry, and they have their own agenda. Wherever Flynn goes, the registry follows, setting up tests of her abilities, hounding her to attend the conference in Atlantic City for evaluation and training.

Flynn can handle the registry’s heavy-handed tactics, threats, and guilt trips. She’s even convinced herself she can deal with her own growing—and increasingly dangerous—powers. But the offer to heal the wounds she sustained in Dead Woman’s Pond, wounds that are making it almost impossible to do the work she loves, is much more tempting.

And if the registry learns of Gen’s addiction to dark magic, agreeing to do whatever the registry wants might be the only bargaining chip Flynn has left.

Unfortunately, the registry’s plans for her are much deadlier than a simple series of tests….

Elle E. Ire resides in Celebration, Florida, where she writes science fiction and urban fantasy novels featuring kickass women who fall in love with each other. She has won local and national writing competitions, including the Royal Palm Literary Award, the Pyr and Dragons essay contest judged by the editors at Pyr Publishing, the Do It Write competition judged by a senior editor at Tor publishing, and she is a winner of the Backspace scholarship awarded by multiple literary agents. She and her spouse belong to several writing groups and attend and present at many local, state, and national writing conferences.

When she isn’t teaching writing to middle school students, Elle enjoys getting into her characters’ minds by taking shooting lessons, participating in interactive theatrical experiences, paying to be kidnapped “just for the fun and feel of it,” and attempting numerous escape rooms. She is the author of Vicious Circle (original release 2015, rerelease 2020), the Storm Fronts series (2019-2020), the Nearly Departed series (2021-2022), and Reel to Real Love (2021). To learn what her tagline “Deadly Women, Dangerous Romance” is really all about, visit her website: http://www.elleire.com. She can also be found on Twitter at @ElleEIre and Facebook at www.facebook.com/ElleE.IreAuthor.

Elle is represented by Naomi Davis at BookEnds Literary Agency.