Cosmogenesis: An Unveiling of the Expanding Universe (Hardcover) 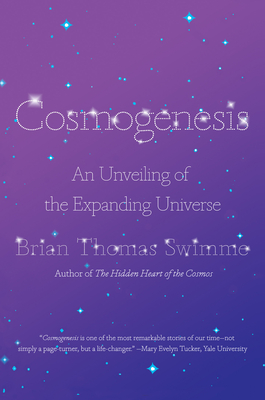 From the host and cocreator of PBS’s Journey of the Universe, a fresh look at how the rich collision between science and spirituality has influenced contemporary consciousness

The understanding that the universe has been expanding since its fiery beginning 14 billion years ago and has developed into stars, galaxies, life, and human consciousness is one of the most significant in human history. It is taught throughout the world and has become our common creation story for nearly every culture. In terms of the universe’s development, we humans are not only economic, religious, or political beings. At the most fundamental level, we are cosmological beings.

Cosmogenesis is one of the greatest discoveries in human history, and it continues to have a profound impact on humanity. And yet most science books do not explore the effects it has had on our individual minds. In Cosmogenesis, Brian Thomas Swimme narrates the same cosmological events that we agree are fact but offers a feature unlike all other writings on this topic. He tells the story of the universe while simultaneously telling the story of the storyteller. Swimme describes how the impact of this new story deconstructed his mind then reassembled it, offering us a glimpse into how cosmogenesis has transformed our understanding of both the universe and the evolution of human consciousness itself.

BRIAN THOMAS SWIMME is a professor at the California Institute of Integral Studies in San Francisco, where he teaches evolutionary cosmology to graduate students in the Philosophy, Cosmology, and Consciousness program. He is the cocreator and host of Emmy award–winning PBS documentary Journey of the Universe and coauthor of the companion book of the same title. He works with the Human Energy Project to produce the popular YouTube series The Story of the Noosphere. His other published works include The Universe Is a Green Dragon, The Universe Story written with Thomas Berry, and The Hidden Heart of the Cosmos.

"The most personal of Swimme’s half-dozen books, a thought-provoking, humble memoir about a period when he stepped off the academic treadmill and forged a transformative intellectual friendship." —Kevin Canfield, San Francisco Chronicle

"Seldom, if ever, within the scientific tradition, has the excitement of the universe been expressed in such memorable phrasing." —Thomas Berry, Creation Magazine

"The overall message of the power of storytelling leaves readers with a new appreciation for how we view the universe's history and ourselves within it . . . An invigorating perspective on how science and spirituality inform the history of human experience." —Kirkus Reviews

"An immediate antidote to shrunken consciousness, Cosmogenesis will enlarge your conception of what a human is for. Swimme’s riveting autocosmology offers a direct, repeatable experience of intimacy with the universe." ––Carolyn Cooke, author of Daughters of the Revolution and Amor & Psycho

"In this book, without warning, a star-inspired mathematician summons us, squabbling bipeds of an over-heating planet, to see ourselves as the evolving universe itself. The grandeur of that calling would seem ludicrously beyond our capacity were it not for the trust our guide elicits. Perhaps what moves us most is the wild generosity he helps us to see at work in the cosmos, and evident in the self-offering of the [super]nova that birthed our own solar system." ––Joanna Macy, author of World as Lover, World as Self

"What a wonderfully engaging book Brian Swimme has given us! So spacious and expansive, even cosmic, yet down-to-earth and deeply human. The lightness of touch, the exquisite care for detail, the honesty, the self-deprecating humor: every scene is described with such Salinger-like vividness it’s as if it is taking place now before one’s eyes. At one level, Cosmogenesis is a model of how to communicate epoch-shaping scientific and philosophical discoveries while narrating the unfolding drama of one’s own life story. But at a deeper level, it is the gradual revelation of how the life of the individual and the life of the cosmos are fundamentally intertwined within a single journey of self-revelation." ––Richard Tarnas, author of The Passion of the Western Mind and Cosmos and Psyche

"In Swimme’s sweeping and beautiful memoir of a life in search of truth, the reader is witness to a remarkable feat of intellectual alchemy. As our protagonist reaches ever deeper for the genesis of the universe, as revealed in the mathematics of his native tongue, he uncovers a subtle, stunning truth. The universe 'out there' is intricately and intrinsically tied up with the universe 'in here.' Swimme’s storytelling skill shines brightly in this unique, intellectual journey, complementing the extraordinary words of, and the author’s engaging encounters with, many of the great minds of the last century. Cosmogenesis is a monument to mystic chords of nature’s memory whose notes join both consciousness and cosmos in the story of creation. May we all be lifted by the soaring, resonant voice of this cosmic bard and learn to sing in harmony with his hymn to the universe." ––Carter Phipps, author of Evolutionaries and Conscious Leadership

"This is a brave, paradigm shifting and page turning book; vulnerable and intimate, vast and lyrical. By sharing the challenges and breakthroughs of his own personal story in the style of an ‘auto-cosmology’, Brian Swimme impactfully reveals epic twists and turns of the Universe Story. Powerful storytelling throughout evokes a new and much needed cosmology which meaningfully brings together subjective lived experience and recent scientific discovery." ––Jane Riddiford, author of Learning to Lead Together: An ecological and community approach, co-founder of Global Generation.

"Cosmogenesis has the gripping intensity of a mystery thriller and the Socratic seriousness of a truth quest. In the pages of this book, the staggering epic of a fourteen-billion-year evolution is told via a steadily accelerating drumbeat of revelations. Both remarkably accessible and irresistibly seductive, this transformative work augurs spiritual rebirth at a planetary scale.” ––Louis G. Herman, author of Future Primal

"Cosmogenesis is the most clearly and convincingly told story of the origin of the universe I have ever read. But that’s not all that makes this an essential read. If humanity is to escape the stranglehold of the lonely, king-of-the-mountain materialism that licenses planetary destruction, it will be when we tell a new story about who we are and how we come to be in the universe expanding around and within us. Cosmogenesis is a powerful telling of that story." ––Kathleen Dean Moore, author of Great Tide Rising

"A love story beautifully told about the storyteller and his vocation, his wife, his mentor Thomas Berry, the universe and us. Wonderful snapshot moments enliven the soul and imagination and tell the valuable and vulnerable story of the price paid for coming to one's vocation. At the same time, the storyteller heralds a new direction for humanity, freshly empowered by our role as cosmic beings in a sacred process of cosmogenesis, where our vocations too become love stories born of our sacred origins." ––Matthew Fox, author of Original Blessing, The Coming of the Cosmic Christ, and The Tao of Thomas Aquinas

"Cosmogenesis is not only an engaging memoir of a visionary cosmologist, but an autobiographical coming of age story of the cosmos itself." ––Sean Kelly, Ph.D., author of Becoming Gaia: On the Threshold of Planetary Initiation and Coming Home: The Birth & Transformation of the Planetary Era

"In Cosmogenesis Swimme’s remarkable reflections on his personal journey bring us face to face with universe-as-teacher. Their dialogue is an exquisite weave of poetics, spirituality, and science. My recommendation to the reader is to let the narrative’s flow carry you along as Brian describes his poignant journey. Then, return to your marked notations seeing them as your personal entry as the cosmos speaks through you." ––John Grim, Yale University, co-author of Ecology and Religion

"Cosmogenesis is one of the most remarkable stories of our time—not simply a page turner, but a life changer. We follow Swimme’s journey of studying science as an academic field to embracing cosmology as a lived experience. In reading this you will be transformed as you enter into new ways of becoming alive in the universe." ––Mary Evelyn Tucker, Yale University, author of The Philosophy of Qi

"Modern science began with the myth of the machine. In only a few centuries, this worldview has completely transformed the world, empowering our species to become a geological force on par with asteroids and ice ages. If Brian Swimme and Thomas Berry are right, science, through the insights derived from its own methods, has now entirely outgrown the mechanistic image of the cosmos. The universe, it turns out, is a green dragon—a creative process rather than a finished product. Swimme's autobiocosmological narrative is, in one sense, the exemplar of an ancient genre counting Augustine's Confessions and Dante's Divine Comedy among its antecedents. But in another sense, Cosmogenesis changes everything: in place of a separate creator God who designs and judges creation from afar, there is pervasive creative attraction luring the universe beyond every settled order; and in place of a static hierarchy of planetary spheres, there is a nested sequence of evolutionary phases. The human is not the end of this stupendous process, but a crucial turning point. Conscious self-reflective creatures now hold the fate of Earth in their hands. Swimme's book serves as a call to adventure to all those ready and willing to meet this moment by becoming cosmological beings." ––Matthew D. Segall, Ph.D, author of Physics of the World-Soul (2021)

“In Cosmogenesis, Brian Swimme, one of the preeminent Western thinkers on cosmology and science, explores the history of the universe, connecting the dots in mythology, philosophy, and science. In a sweeping arc from the origin of the universe to the challenges of the present day, he portrays us for what we really are: cosmological beings and a tribe of storytellers. He shows that storytelling itself is a cosmic event, a moment of cosmic self-awareness. This is a book in the tradition of grand narrative, and a must-read for the curious, searching for our place in the universe and our mission for the cosmic future.” ––Wolfgang Leidhold, Professor of Political Theory & History of Ideas, University of Cologne, Germany

"As a theoretical physicist interested in the wider cultural and spiritual implications of modern science, I have long been a fan of the work of Brian Thomas Swimme, who has a particularly inspiring take on the standard scientific paradigm—that the universe is not just something to be theoretically understood but something we can have an experiential relationship with. In his most recent book, Cosmogenesis, he intermingles his description of the development of his ideas with his own very personal history. Poignant, epic, and fascinating, it is quite simply a joy to read." ––Professor Jonathan Halliwell, Department of Physics, Imperial College London