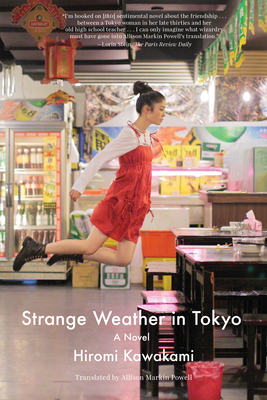 Shortlisted for the 2013 Man Asian Literary Prize, Strange Weather in Tokyo is a story of loneliness and love that defies age.

Tsukiko, thirty–eight, works in an office and lives alone. One night, she happens to meet one of her former high school teachers, "Sensei," in a local bar. Tsukiko had only ever called him "Sensei" ("Teacher"). He is thirty years her senior, retired, and presumably a widower. Their relationship develops from a perfunctory acknowledgment of each other as they eat and drink alone at the bar, to a hesitant intimacy which tilts awkwardly and poignantly into love.

As Tsukiko and Sensei grow to know and love one another, time's passing is marked by Kawakami's gentle hints at the changing seasons: from warm sake to chilled beer, from the buds on the trees to the blooming of the cherry blossoms. Strange Weather in Tokyo is a moving, funny, and immersive tale of modern Japan and old–fashioned romance.

Hiromi Kawakami was born in Tokyo in 1958. Her first book, God (Kamisama) was published in 1994. In 1996, she was awarded the Akutagawa Prize for Tread on a Snake (Hebi o fumu), and in 2001 she won the Tanizaki Prize for her novel Strange Weather in Tokyo (Sensei no kaban), which was an international bestseller. The book was short-listed for the 2012 Man Asian Literary Prize and the 2014 International Foreign Fiction Prize.

Allison Markin Powell is a translator, editor, and publishing consultant. In addition to Hiromi Kawakami’s Strange Weather in Tokyo, The Nakano Thrift Shop, and The Ten Loves of Nishino, she has translated books by Osamu Dazai and Fuminori Nakamura, and her work has appeared in Words Without Borders and Granta, among other publications. She maintains the database japaneseliteratureinenglish.com.

Praise for Strange Weather in Tokyo (previously published as The Briefcase)

“In its love of the physical, sensual details of living, its emotional directness, and above all in the passion for food, this is somewhat reminiscent of Banana Yoshimoto's Kitchen.” —INDEPENDENT, (UK)

“Simply and earnestly told, this is a profound exploration of human connection and the ways love can be found in surprising new places.” —BuzzFeed

“Each chapter of the book is like a haiku, incorporating seasonal references to the moon, mushroom picking and cherry blossoms. The chapters are whimsical and often melancholy, but humor is never far away.... It is a celebration of friendship, the ordinary and individuality and a rumination on intimacy, love and loneliness. I cannot recommend Strange Weather in Tokyo enough, which is also a testament to the translator who has skillfully retained the poetry and beauty of the original.” —The Japan Society

“Strange Weather in Tokyo is a tender love story that drifts with the lightness of a leaf on a stream. Subtle and touching, this is a novel about loneliness, assuaged by an unlikely romance, and brought to life by one of Japan's most engaging contemporary writers.” —Readings (Australia)

“I'm hooked on [this] sentimental novel about the friendship, formed over late nights at a sake bar, between a Tokyo woman in her late thirties and her old high school teacher . . . I can only imagine what wizardry must have gone into Allison Markin Powell’s translation.” —Lorin Stein, The Paris Review Daily

“A sweet and poignant story of love and loneliness . . . A beautiful introductory book to Kawakami’s distinct style.” —Book Riot

“In quiet, nature–infused prose that stresses both characters' solitude, Kawakami subtly captures the cyclic patterns of loneliness while weighing the definition of love.” —Booklist

“I love this book and its characters so much. It’s the best.” —Bryan Washington, author of Lot

“A dream–like spell of a novel, full of humor, sadness, warmth and tremendous subtlety. I read this in one sitting and I think it will haunt me for a long time.” —Amy Sackville