The Other End of the Sea (Paperback) 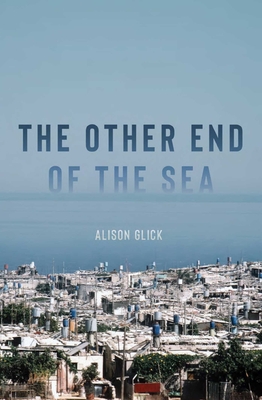 A stirring story of love discovered in unexpected places, growing us beyond who we thought we were—or imagined we could become

Summer, 1981—Following the death of her father, Becky Klein, an adventurous, naive young woman from the Midwest, sets out for the Middle East, in search of her Jewish roots. She discovers something more, in a Gaza garden near a refugee camp by the sea. There she befriends the garden’s owner, a Palestinian activist who has served time in Israeli jails. As their relationship grows, Rebecca finds herself drawn into a story of roots unlike the one she had imagined.

The West Bank, Cairo, Yarmouk, Benghazi—before long, their romance careens across a region in flames, child in tow, wrestling with conflicting maps of love, family and home.

Moving, yet brimming with flashes of humor, Alison Glick’s tangle with the search for purpose and commitment yields a bracing, radiant story for these times.

Alison Glick journeyed in the early 1980s to Israel, where she lived in a kibbutz and in a town near Haifa. After studying Middle East history at Temple University, she returned and lived in the West Bank, Gaza Strip, and Yarmouk Refugee Camp in Syria for six years, working as a teacher, human rights researcher, and freelance writer. Alison’s writing has appeared in the Washington Report on Middle East Affairs, Arab Studies Quarterly, and Mondoweiss. The Other End of the Sea is her first novel.

“This is a love story with more than one twist. Nothing is completely standard or expected, whether the characters, setting, plot events, or conclusion … Glick’s fluid writing style, intense imagery, and particular alertness to body language encourage visualization of the scenes in the novel, while her thoughtful and sometimes ironic tone prods one to ponder the themes she raises, which range from the struggle for justice to the perils and promise of connecting the personal and the political. At other times there are downright funny episodes … There are a lot of hard facts packed into this book … but what makes it special is the less tangible, less quantifiable insight into Palestinian culture and the meaning of commitment and family. While Gaza is often dismissed as a miserable place, Rebecca tells us how Gazans create beauty, meaning and fun out of nothing … The Other End of the Sea is not a lament over lost love or a romance gone astray. Rather, it is a window for reflecting on what ties us to other people …"
— The Jordan Times

“I am astounded by the depth of understanding that this book demonstrates of the Palestinian experience over the last four decades [...] This book will strike a chord among Palestinians especially, and other people across the world who have experienced severe oppression in their countries [...] The Other End of the Sea is a gripping story of a difficult love between two people, and also of their love for dignity and freedom, under unbearable conditions. It also includes humor that will be familiar to people who are continuously fighting for their dignity.”
— Mondoweiss

“Glick's novel is fast paced and replete with detail. It is particularly strong in exposing how the cycle of exile and the pains of return remain identifiable in the Palestinian story, even when told through an outsider's lens.”
— Middle East Monitor

“The Other End of the Sea is an extraordinary novel of self-discovery and emotional courage that will move many readers to tears … This is a beautifully wrought narrative unfolding from the time of the first intifada that tactfully, yet tenderly, conveys a profound political message of empathy for the victims of the prolonged Palestinian ordeal. Such a book should be required reading for every American, above all by members of Congress who have long closed their eyes and ears to the cruelties of the Israeli occupation. Alison Glick should be congratulated for composing such a captivating story that should be experienced as a superior achievement of the literary imagination.”
— Richard A. Falk, Milbank Professor of International Law Emeritus, Princeton University

“[A] brilliant novel … a bona fide love story, complete with the tenderness, pain, intimacy and miscommunication that define any romantic relationship … Glick takes readers through a very unique and important experience — that of Palestinian exiles. Her masterful storytelling is gripping, pulling us fully into every scene. Over the course of the 30-year-long story, each historical event, place, situation and person erupts into Technicolor.”
— The Markaz Review