Somewhere Sisters: A Story of Adoption, Identity, and the Meaning of Family (Hardcover) 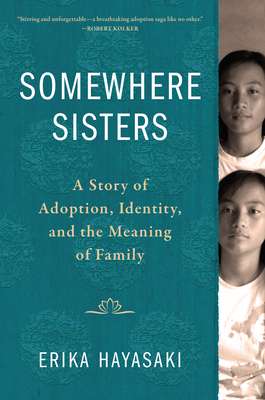 An incredible, deeply reported story of identical twins Isabella and Hà, born in Viêt Nam and raised on opposite sides of the world, each knowing little about the other’s existence until they were reunited as teenagers, against all odds.

“Stirring and unforgettable—a breathtaking adoption saga like no other.” —Robert Kolker

It was 1998 in Nha Trang, Việt Nam, and Liên struggled to care for her newborn twin girls. Hà was taken in by Liên’s sister, and she grew up in a rural village with her aunt, going to school and playing outside with the neighbors. They had sporadic electricity and frequent monsoons. Hà’s twin sister, Loan, was adopted by a wealthy, white American family who renamed her Isabella. Isabella grew up in the suburbs of Chicago with a nonbiological sister, Olivia, also adopted from Việt Nam. Isabella and Olivia attended a predominantly white Catholic school, played soccer, and prepared for college.

But when Isabella’s adoptive mother learned of her biological twin back in Việt Nam, all of their lives changed forever. Award-winning journalist Erika Hayasaki spent years and hundreds of hours interviewing each of the birth and adoptive family members. She brings the girls’ experiences to life on the page, told from their own perspectives, challenging conceptions about adoption and what it means to give a child a good life. Hayasaki contextualizes the sisters’ experiences with the fascinating and often sinister history of twin studies, intercountry and transracial adoption, and the nature-versus-nurture debate, as well as the latest scholarship and conversation surrounding adoption today, especially among adoptees.

For readers of All You Can Ever Know and American Baby, Somewhere Sisters is a richly textured, moving story of sisterhood and coming of age, told through the remarkable lives of young women who have redefined the meaning of family for themselves.

Erika Hayasaki is a journalist based in Southern California, the author of The Death Class, and a professor in the literary journalism program at the University of California, Irvine. A former Los Angeles Times national correspondent, her writing has appeared in the New York Times Magazine, the Atlantic, Wired, and other publications. She has been a Knight-Wallace Reporting Fellow and an Alicia Patterson Fellow, and she has received awards and recognition from the Association of Sunday and Feature Editors, the Society for Features Journalism, the American Society of Newspaper Editors, and The Best American Science and Nature Writing 2019. She is the mother of a daughter and twin boys.

"Somewhere Sisters is stirring and unforgettable — a breathtaking adoption saga like no other; a provocative exploration into the ideas of family and belonging; and a deeply meaningful meditation on what makes us who we are and what connects us to one another.”—Robert Kolker, New York Times-bestselling author of Hidden Valley Road and Lost Girls

“Somewhere Sisters is a heartbreaking, many times maddening tale of three adoptees, two of whom are twins separated at birth, who find themselves at the intersection of nature and nurture, fighting against fate and circumstance to carve out their own destinies. Seamlessly weaving historical context with brilliant reportage, Hayasaki delivers an incisive and poignant exploration of the world of transracial adoption and twinship, bearing witness to the profound struggles of those caught between two worlds, trying to define themselves.” —Ly Tran, author of House of Sticks

“Hayasaki contextualizes [the sisters’] stories in the larger history of transracial and transnational adoption, as well as nature-nurture science, making for a nuanced portrait.”—NPR, Best Books of 2022

“Expertly reported, this tale of Vietnamese twins separated in infancy and raised in a world apart challenges perceptions of international adoption.”—People Magazine

“Hayasaki, a journalist who spent five years tracing the girls’ diverging paths, writes a sensitive, well-researched account of the years before and after their emotional reunion.”—The Washington Post

“A talented journalist, Hayasaki has meticulously reported this story, touching on complex topics such as the ethics of adoption, Asian American identity, how siblings reunite, and more.”—Shondaland

“Hayasaki explores the many dimensions of transracial and transnational adoption in this moving account of families torn apart.”
—The Cut

“Erika Hayasaki lays out what happened to both twins, and what their story can teach us about family, nature and nurture, and adoption.”—Bustle

"Deeply researched, artfully woven, and lyrically written, Somewhere Sisters explores the harsh reality behind international transracial adoption. Hayasaki is a master storyteller, and her compassion for her subjects is evident on every page. Her meticulous exploration into the dark legacy of nature-nurture studies, American saviorism, and the science of attachment is a powerful addition to our understanding of the lifelong impact of adoption."—Gabrielle Glaser, author of the New York Times notable book American Baby


“Well-researched and compassionately written, Somewhere Sisters is a journey from separations to reunions, from individual lives to the history of adoption. Urgent and compelling, this book asks important questions about responsibility and ethics and will inspire all of us as we work toward a more responsible and inclusive society.”—Nguyen Phan Que Mai, author of the international bestseller The Mountains Sing

"Erika Hayasaki has produced an elegant exploration of race and nationality. This intimate, meticulously reported portrait of an impoverished Vietnamese mother and her twin daughters, who were separated by adoption, is a not only a compelling story, but one that touches on profound questions of human identity.”—Barbara Demick, author of Eat the Buddha: Life and Death in a Tibetan Town and Nothing to Envy: Ordinary Lives in North Korea

“Hayasaki reveals the racial and class prejudices at the root of such adoptions without losing sight of the complexities of human emotions and family ties. This is a clear-eyed and well-grounded take on a thorny social issue.”—Publishers Weekly

“Hayasaki weaves their reflections about belonging, heritage, and identity—gleaned from hundreds of hours of interviews with the girls and their birth and adoptive families—with a broad consideration of adoption and twin studies that aim to shed light on the extent to which genes and environment shape human behavior, personality, and development. An engaging portrait of intersected lives.”—Kirkus Reviews

“Fascinating and moving on its own, the sisters' complex story of growing up, both together and apart, is complemented by Hayasaki's illumination of the personal, psychological, and sociocultural realities of adoption.”—Booklist

“SOMEWHERE SISTERS should be required reading for anyone considering intercountry and/or transracial adoption. Even-handed and balanced, Hayasaki’s book is a vivid, searing portrait of the complex realities behind the simple saviorism that is so often the impetus for foreign adoptions.”—Washington Independent Review of Books, "Our 51 Favorite Books of 2022"

“This book raises so many critical questions about the responsibility of wealthier countries and their attitude toward adoption in countries that they often left after years of colonization and war… A very emotional and human account of finding out what the meaning of family is.”—San Diego Union Tribune

“This incredible true story is as fascinating as any novel... Journalist Erika Hayasaki interviewed family members extensively in order to write this nuanced tale of transracial adoption, nurture-versus-nature, and sisterhood.”
—BookBub