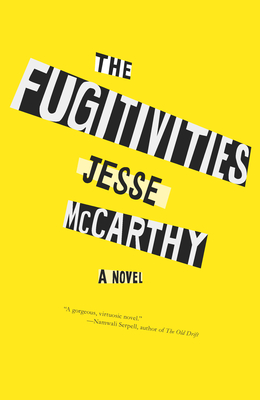 "Virtuosic ... glorious in its exploration." —The New York Times

Like most recent college graduates, Jonah Winters is unsure of what's next. A young black American raised in France and living in New York City, he tries on a couple of careers only to find that nothing feels right.  And as Jonah struggles to envision his future, he feels pressured by his friends and family to put the struggles of his community before his search for self.

But then a chance encounter with an ex-NBA player with his own regrets, inspires Jonah to take his life into his own hands. Deciding to leave the country entirely, he sets off for Brazil. And as he makes and breaks friendships on the way, reflects on his past relationships, and learns to rely on himself, Jonah slowly forms an understanding of self, community, and freedom that is rarely afforded to young black men.

Jesse McCarthy is the author of the essay collection Who Will Pay Reparations On My Soul? and has written for several publications including The New York Times, n+1, and The New Republic. He is a contributing editor at The Point and is an associate professor of English, African American, and African History at Harvard. This is his first novel.

"Best of 2021: Our Favorite Fiction" — Kirkus
A "Most Anticipated Book"—The Millions

"Virtuosic ... [McCarthy's] prose, agile as a pianist in full flow, dances across the page ... there are no conclusions, no resolutions to this fugue state, but there is something glorious in its exploration." —The New York Times

"If you haven’t already heard of Jesse McCarthy, you soon will be! ... [The Fugitivities] is best enjoyed by sinking into the ruminative prose and savoring the ride." —Bookreporter

"The Fugitivities is a thrilling twenty-first-century sentimental education—a tale of black intellectual guilt and irrepressible wanderlust that follows a young teacher from disillusionment in Brooklyn to doubt and revelation abroad. McCarthy’s spiraling, observant, exquisitely cadenced prose is a shot of adrenaline in a sea of laconic and episodic fiction. A powerful debut that is worldly in the most expansive sense—and with electricity to spare." —Julian Lucas, New Yorker staff writer

"The Fugitivities is an ambitious, debut novel that speaks to the deepest of vulnerabilities of the human condition: how we make sense of our identities as it relates to others and our stake and responsibilities in the world."  —Morgan Jerkins, author of This Will Be My Undoing

"A gorgeous, virtuosic novel. In exquisite, often ecstatic, prose, McCarthy gives us a portrait of the artist as a black man—or rather, as a set of young black men, brothers and friends and rivals. This is blackness as it collides with class and love. Blackness in its uneasy relationship to Europe and the Americas. Blackness in all of its inner intricacy, tension, and beauty. Blackness shattered from the inside, each facet spinning, in McCarthy's own words, in "a hypnotic dance like shards in a kaleidoscope." —Namwali Serpell, author of The Old Drift