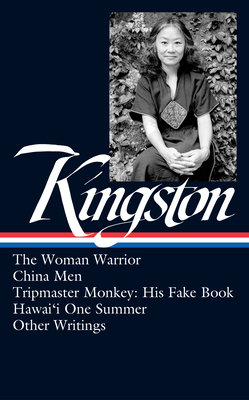 The largest and most comprehensive edition of our foremost Asian American writer: three classic books and additional writings, many rare, that together offer a vivid and searching portrait of immigrant experience and American dreams.

Maxine Hong Kingston made a stunning entrance on the American literary scene with The Woman Warrior (1976), her “memoirs of a childhood among ghosts." Not only an account of growing up poor and Chinese American in the San Joaquin Valley, it was also an audacious feat of imaginative transformation and pathbreaking work of feminist autobiography, drawing on ancient myths and the family stories her mother brought over from China to make sense of a transformed life in America.

A companion to The Woman Warrior, which she called her “mother-book,” Kingston’s “father-book” China Men (1980) spreads out across a large geographical and historical canvas to envision the lives of her male relatives who immigrated to America. Taken together, The Woman Warrior and China Men offer a profound, kaleidoscopic, genre-defying narrative of the American experience.

Kingston's third book, Tripmaster Monkey: His Fake Book (1989), is the wildly inventive story of Wittman Ah Sing, a Berkeley graduate student whose experience of the San Francisco Beat scene transforms his understanding of his own Chinese heritage.

Rounding out the volume are a series of essays from 1978 reflecting on her life in Hawaii, later collected as Hawai‘i One Summer, personal musings whose subjects range from the contentions of a conference of Asian American writers to home-buying, surfing, and the work of the Beat poet Lew Welch.

Also included are hard-to-find essays about the creative process and Kingston’s exasperated, insightful account of how most of the reviewers of The Woman Warrior fell prey to lazy stereotypes about the “exotic” and “inscrutable” East.

Maxine Hong Kingston (b. 1940) is the author of many works of memoir, fiction, poetry, and essays. She has been the recipient of the National Book Award (for China Men), the National Book Critics Circle Award for Nonfiction (for The Woman Warrior), the PEN West Award for Fiction (for Tripmaster Monkey), an American Academy of Arts and Letters Award in Literature, a National Humanities Medal, and the National Medal of Arts. She is Professor Emerita at the University of California, Berkeley.

Viet Thanh Nguyen (b. 1971), editor, is the author of the novel The Sympathizer, which won the Pulitzer Prize for Fiction. His other books include, most recently, the story collection The Refugees, as well as Nothing Ever Dies: Vietnam and the Memory of War and Race and Resistance: Literature and Politics in Asian America. The recipient of a Guggenheim fellowship and many other awards, he is currently the Aerol Arnold Chair of English and Professor of English and American Studies and Ethnicity at the University of Southern California. He was a student of Kingston’s at the University of California, Berkeley.

“[Kingston's] transgressive willingness to go for broke made her a pioneering inspiration for the scads of wonderful writers who began mapping the territory she first opened. You can find her footprints in, among others, Amy Tan's The Joy Luck Club, Junot Diaz's The Brief Wondrous Life of Oscar Wao, Charles Yu's Interior Chinatown and The Sympathizer, by Viet Thanh Nguyen, who edited this collection ... She opened up new territory for readers like me, too. Re-reading these books today, I've been struck by how much of what I now think of as conventional wisdom became so because of her unconventional work. In a way, Maxine Hong Kingston truly is an outlaw knot-maker, but her work doesn't make anyone go blind — it helps us to see.” — John Powers, NPR / “Fresh Air”