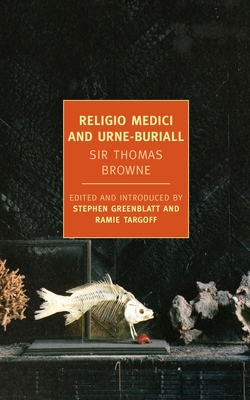 Is this the best piece of prose ever put on paper? Yes...yes, I think it very well might be. One of my "desert island" reads.

Sir Thomas Browne is one of the supreme stylists of the English language: a coiner of words and spinner of phrases to rival Shakespeare; the wielder of a weird and wonderful erudition; an  inquiring spirit in the mold of Montaigne. Browne was an inspiration to the Romantics as well as to W.G. Sebald, and his work is quirky, sonorous, and enchanting.

Here this baroque master’s two most enduring and admired works, Religio Medici and Urne-Buriall, appear in a new edition that has been annotated and introduced by the distinguished scholars Ramie Targoff and Stephen Greenblatt (author of the best-selling Will in the World and the National Book Award–winning The Swerve). In Religio Medici Browne mulls over the relation between his medical profession and his profession of the Christian faith, pondering the respective claims of science and religion, questions that are still very much alive today. The discovery of an ancient burial site in an English field prompted Browne to write Urne-Buriall, which is both an early  anthropological examination of different practices of interment and a profound meditation on mortality. Its grave and exquisite music has resounded for generations.

Sir Thomas Browne (1605–1682) was the son of a prosperous London merchant who died while his son was still young. Browne attended Winchester College and Oxford, then spent several years studying medicine at Montpellier, Padua, and Leiden, before receiving his MD in 1633. In 1637 he settled in Norwich where he practiced medicine and lived for the rest of his life. Religio Medici was first published in 1642, without the author’s consent; a year later he approved a new printing (with some of the controversial material removed), and the book became a best seller, subsequently translated into several European languages (and placed on the Papal Index). Browne’s eccentric encyclopedia, Pseudodoxia Epidemica, was first published in 1646 and went through six editions. His last work to be published in his lifetime, Urne-Buriall, appeared in 1658. Browne was knighted in 1671, when King Charles II, his queen, and his court came to Norwich.

Stephen Greenblatt is one of the founders of New Historicism, and the author of many books, including Will in the World: How Shakespeare Became Shakespeare and The Swerve: How the World Became Modern (winner of the National Book Award and the Pulitzer Prize). He is the John Cogan University Professor of the Humanities at Harvard.

Ramie Targoff is the author of Common Prayer: The Language of Public Devotion in Early Modern England; John Donne: Body and Soul; and the forthcoming Posthumous Love: Eros and the Afterlife in Renaissance England. She is the Jehuda Reinharz Director of the Mandel Center for the Humanities and a professor of English at Brandeis.

“The iniquity of oblivion blindly scatters her poppy seed and when wretchedness falls upon us one summer’s day like snow, all we wish for is to be forgotten. These are the circles Browne’s thought’s describe.” —W. G. Sebald, author of The Rings of Saturn

“Sir Thomas Browne, the wonderful 17th century baroque prose stylist and Borgesian speculative essayist whose works (such as Urne-Burial and Religio Medici) are inimitable idiosyncratic classics on the order of the Anatomy of Melancholy and Tristram Shandy.” —New York Observer

“How does one recommend to the modern reader a writer whose two masterpieces are a rambling mediation about faith and human variety, and a study of burial customs? Yet Browne is one of the greatest of our prose writers, religious and at the same time intensely rational, and he observed the details of human life like the physician he was.” —The Observer (London)

“Browne is one of the great English prose stylists—the very greatest, some critics have even said and in certain respects he is the prose equivalent to the great ‘Metaphusicals’ in verse.” —The Irish Times

“Browne has paved the way for all psychological novelists, autobiographers, confession-mongers, and dealers in the curious shades of our private life. He it was who first turned from the contacts of men with men to their lonely life within. . . . He is the ﬁrst of the autobiographers.”  —Virginia Woolf

“The iniquity of oblivion blindly scatters her poppy seed and when wretchedness falls upon us one summer’s day like snow, all we wish for is to be forgotten. These are the circles Browne’s thought’s describe.” —W. G. Sebald, author of The Rings of Saturn

“Scholars and polymaths come and go, but for sheer idiosyncrasy few could beat Sir Thomas Browne the 17th century doctor, botanist, naturalist, theologian, historian and mystic whose work comprises one of the most fascinatingly esoteric bodies of knowledge in English.” —Tim Martin, The Times (London)

“One of the most celebrated examples of 17th century prose.” —The New York Times

“It smells in every word of the sepulchre.” —Ralph Waldo Emerson

“Like Hamlet, it is full of quotes . . . Browne is a miniaturist, and elegant raiser of ideas and a provoker of ideas in other: it was in a long note made in his copy by Coleridge that the very word ‘marginalia’ was invented. You can dip in and out of Urne-Burial: ‘genially ambling prose,’ as Terry Eagleton characterized Browne’s generous, inquisitive style. It is the most soothing of mement mori.” —The Guardian (London)

“No desert island would be all bad that had upon it copies of Sir Thomas Browne’s Religio Medici and Robert Burton’s Anatomy of Melancholy.” —The Age (Melbourne)

“One of the masterworks of English prose” —Sunday Times (London)