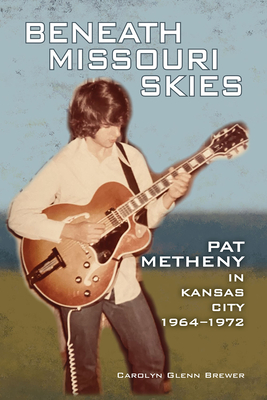 The New Yorker recently referred to Pat Metheny as “possibly the most influential jazz guitarist of the past five decades.” A native of Lee’s Summit, Missouri, just southeast of Kansas City, Metheny started playing in pizza parlors at age fourteen. By the time he graduated from high school he was the first-call guitarist for Kansas City jazz clubs, private clubs, and jazz festivals. Now 66, he attributes his early success to the local musical environment he was brought up in and the players and teachers who nurtured his talent and welcomed him into the jazz community.

Metheny's twenty Grammys in ten categories speak to his versatility and popularity. Despite five decades of interviews, none have conveyed in detail his stories about his teenage years. Beneath Missouri Skies also reveals important details about jazz in Kansas City during the sixties and early seventies, often overlooked in histories of Kansas City jazz. Yet this time of cultural change was characterized by an outstanding level of musicianship.

Author Carolyn Glenn Brewer shows how his keen sense of ensemble had its genesis in his school band under the guidance of a beloved band director. Drawn from news accounts, archival material, interviews, and remembrances, to which the author had unique access, Beneath Missouri Skies portrays a place and time from which Metheny still draws inspiration and strength.

CAROLYN GLENN BREWER is a retired band director and active social historian. She has written for Jam Magazine and previously published Changing the Tune: The Kansas City Women's Jazz Festival with UNT Press. She has played clarinet in bands, chamber groups, and orchestras throughout the Kansas City area. She lives in Kansas City with her husband and Bernese Mountain dog, Herbie.

“Brewer presents a very detailed yet balanced view of Metheny’s musical growth, and the KC area musicians that were part of that development. That approach gives the reader an insight into the overall KC jazz scene at the time.”—Terry Perkins, reviewer for Downbeat magazine

“Geniuses don’t just appear out of nowhere, though their uniqueness can make it seem so. Carolyn Glenn Brewer sheds as much light on the nature versus nurture debate as she does on the zeitgeist of the 1960s in this book about Pat Metheny. Readers will come away as better-informed listeners to the genius of Metheny’s music. And, as her book details, the dedication of the music educators and mentors who nurtured Pat’s nascent abilities contributed to the realization of an artist whose music would literally touch millions. An enjoyable and informative read.”—Peter Erskine, two-time Grammy Award-winning drummer and Professor of Practice at the Thornton School of Music at USC

“This book provides an interesting portrait of the greater Kansas City jazz community and how they embraced and nurtured an exceptional young guitarist, Pat Metheny. All musicians reflect their mentors and major influences, but rarely are they chronicled in a book filled with such personal recollections about a jazz superstar-to-be during their formative years. Pat has achieved the hardest thing in music with his great playing and compositions: he has established his own original ‘voice’ which resonates with wildly enthusiastic audiences around the world.”—Chris Brubeck, orchestral composer and jazz bassist with The Brubeck Brothers Quartet, Triple Play and The Dave Brubeck Quartet

“Beneath Missouri Skies beautifully details Pat’s early musical life, including his formative experiences with family, friends, teachers, bandleaders, and bandmates (some of whom never received the fame and recognition they deserved). Even after playing with Pat for 18 years, I learned so many things about him I previously didn’t know.”—Paul Wertico, Pat Metheny Group drummer (1983-2001) and Associate Professor of Jazz Studies, Roosevelt University

“This is a really cool book about the early years of one of the greatest guitar players and composers on the planet. Pat’s also a really wonderful person. Lee’s Summit and the Kansas City area must be a great place to grow up.”—Mike Stern, award-winning guitarist with Miles Davis and Blood, Sweat & Tears

"[A] fascinating in-depth account of Metheny's formative musical years. . . . Much of the information included here concentrates on not only Metheny's personal experiences, but those of musicians who helped him develop as a player."--All About Jazz

"[Brewer] bolsters her eyewitness impressions of many of the key events of Beneath Missouri Skies with extensive research and interviews. Beneath Missouri Skies will delight Metheny enthusiasts eager to learn even the most minute details of his musical development, but it's even more crucial as a history of a previously underdocumented era of jazz in Kansas City."--Plastic Sax

"Beneath Missouri Skies is simply a great read! Carolyn Glenn Brewer should be highly commended for her unusual presentation of the early beginnings of the groundbreaking career of jazz guitarist Pat Metheny."--Kansas City Jazz Ambassadors

"Brewer had a ring side seat to many of the guitarist's early performances and she writes about those and other club and concert dates with color and great detail. One learns not only about the early evolution and life of Pat Metheny (including his work with the New Sounds Trio, regular engagements at the Ramada inn, and the band Four) but about the Kansas City jazz scene of the time."--L.A. Jazz Scene/Jazz around Town