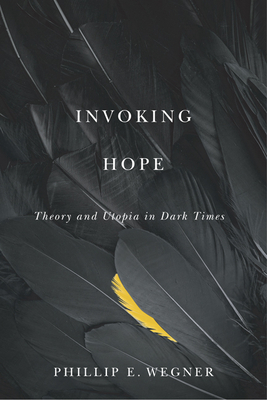 By Phillip E. Wegner
$28.00
On Our Shelves Now (Please wait for us to confirm and & contact you when it's ready)

An appeal for the importance of theory, utopia, and close consideration of our contemporary dark times

What does any particular theory allow us to do? What is the value of doing so? And who benefits? In Invoking Hope, Phillip E. Wegner argues for the undiminished importance of the practices of theory, utopia, and a deep and critical reading of our current situation of what Bertolt Brecht refers to as finsteren Zeiten, or dark times.

Invoking Hope was written in response to three events that occurred in 2016: the five hundredth anniversary of the publication of Thomas More’s Utopia; the one hundredth anniversary of the founding text in theory, Ferdinand de Saussure’s Course in General Linguistics; and the rise of the right-wing populism that culminated in the election of Donald Trump. Wegner offers original readings of major interventions in theory alongside dazzling utopian imaginaries developed from classical Greece to our global present—from Theodor Adorno, Ernst Bloch, Alain Badiou, Jacques Derrida, Fredric Jameson, Sarah Ahmed, Susan Buck-Morss, and Jacques Lacan to such works as Plato’s Republic, W. E. B. Du Bois’s John Brown, Isak Dinesen’s “Babette’s Feast,” Kim Stanley Robinson’s 2312, and more. Wegner comments on an expansive array of modernist and contemporary literature, film, theory, and popular culture.

With Invoking Hope, Wegner provides an innovative lens for considering the rise of right-wing populism and the current crisis in democracy. He discusses challenges in the humanities and higher education and develops strategies of creative critical reading and hope against the grain of current trends in scholarship.

Phillip E. Wegner is Marston–Milbauer Eminent Scholar in English at the University of Florida. He is author of Life between Two Deaths, 1989–2001: U.S. Culture in the Long Nineties; Periodizing Jameson: Dialectics, the University, and the Desire for Narrative; and Shockwaves of Possibility: Essays on Science Fiction, Globalization, and Utopia.

"This is a book that banishes intellectual lethargy forever, so dazzling are the close readings that flesh out its world-scale philosophy and so forceful is its polemic—a polemic on behalf of knowledge itself as much as theory, commitment, and a responsibly grounded, even necessary, account of hope."—Bruce Robbins, author of The Beneficiary

"With originality and humor, Phillip E. Wegner extends Fredric Jameson’s tradition of dialectically reappropriating formalisms, showing how even the most seemingly static structures can be deployed to think diachronically and reinvigorate our abilities to historicize. This fearless book is exactly what we need now."—Sianne Ngai, University of Chicago

"Invoking Hope is a major intervention by our leading theorist of utopia—a manifesto for the crisis of the present and the possibility of a better future. Drawing on a mix of Western Marxism and Badiou, Phillip E. Wegner argues for the necessity of a positive hermeneutics and the imagination of possible futures. In the Pandora’s box of the present, Wegner finds the hope that emerges last but promises everything."—Christopher Breu, Illinois State University