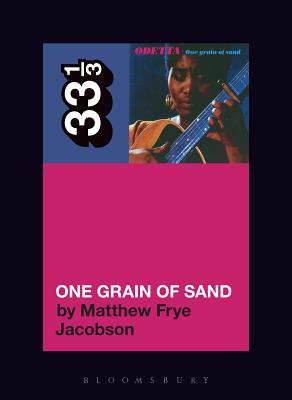 When 20-year-old Odetta Holmes-classically trained as a vocalist and poised to become "the next Marian Anderson"-veered away from both opera and musical theater in favor of performing politically charged field hollers, prison songs, work songs, and folk tunes before mixed-race audiences in 1950s coffee houses, she was making one of the most portentous decisions in the history of both American music and Civil Rights.

Released the same year as her famous rendition of "I'm on My Way" at the March on Washington, One Grain of Sand captures the social justice project that was Odetta's voice. "There was no way I could say the things I was thinking, but I could sing them," she later remarked. In pieces like "Moses, Moses," "Ain't No Grave," and "Ramblin' Round Your City," One Grain of Sand embodies Odetta's approach to the folk repertoire as both an archive of black history and a vehicle for radical expression. For many among her audience, a song like "Cotton Fields" represented a first introduction to black history at a time when there was as yet no academic discipline going by this name, and when history books themselves still peddled convenient fictions of a fundamentally "happy" plantation past. And for many among her audience, black and white, this young woman's pride in black artistry and resolve, and her open rage and her challenge to whites to recognize who they were and who they had been, too, modeled the very honesty and courage that the movement now called for.

Matthew Frye Jacobson teaches American Studies and African American Studies at Yale University, and is the co-founder of the Public Humanities program there. He has written extensively on a range of cultural forms, including film, television, literature, the arts, sports, music, and comedy. In addition to his five books on aspects of race in US culture, he has conducted several documentary, curatorial, and artistic projects, including The Historian's Eye, a web-based documentary project, and his forthcoming film, A Long Way from Home: The Untold Story of Baseball's Desegregation.