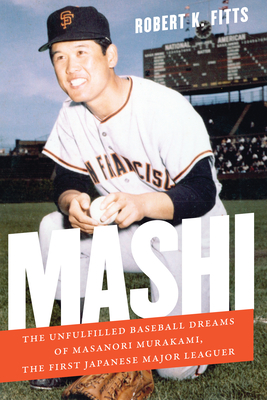 By Robert K. Fitts
$18.95
On Our Shelves Now (Please wait for us to confirm and & contact you when it's ready)

In the spring of 1964, the Nankai Hawks of Japan’s Pacific League sent nineteen-year-old Masanori Murakami to the Class A Fresno Giants to improve his skills. To nearly everyone’s surprise, Murakami, known as Mashi, dominated the American hitters. With the San Francisco Giants caught in a close pennant race and desperate for a left-handed reliever, Masanori was called up to join the big league club, becoming the first Japanese player in the Major Leagues.

Featuring pinpoint control, a devastating curveball, and a friendly smile, Mashi became the Giants’ top lefty reliever and one of the team’s most popular players—as well as a national hero in Japan. Not surprisingly, the Giants offered him a contract for the 1965 season. Murakami signed, announcing that he would be thrilled to stay in San Francisco. There was just one problem: the Nankai Hawks still owned his contract.

The dispute over Murakami’s contract would ignite an international incident that ultimately prevented other Japanese players from joining the Majors for thirty years. Mashi is the story of an unlikely hero caught up in an American and Japanese baseball dispute and forced to choose between his dreams in the United States and his duty in Japan.

Robert K. Fitts is the author of Banzai Babe Ruth: Baseball, Espionage, and Assassination during the 1934 Tour of Japan (Nebraska, 2012), winner of the Society of American Baseball Research’s 2013 Seymour Medal for the best baseball book, and Wally Yonamine: The Man Who Changed Baseball (Nebraska, 2008).

“Fitts, coupled with Murakami’s voice and experiences, tells the proud tale of a young man who was whisked into the spotlight and became a shining example of the equality that could be reached between the Japanese and Americans on the baseball diamond. Reading Mashi brings us all a few steps closer to what it was like to be there on this landmark journey.”—San Francisco Examiner

"Mashi is a nice look at a man and career that deserved to be more than footnotes in baseball history."—Bob D'Angelo, Tampa Tribune
— Bob D'Angelo

“Mashi Murakami’s impact can still be felt in baseball stadiums on both sides of the Pacific. He is a pioneer in every sense of the word—a true ambassador for the game of baseball.”—Allan H. “Bud” Selig, the ninth commissioner of baseball
— Allan H. "Bud" Selig

"This is a an excellent baseball story, a story of cultural adaptation and conflict, and above all the story of one man’s opportunity and the obstacles he overcame to make the most of that opportunity."—Duncan Jamieson, Journal of Sport Literature
— Duncan Jamieson

"Mashi will take you along on his eventful ride from Yamanashi Prefecture to San Francisco."—Rashaad Jorden, JETwit.com
— Rashaad Jorden

“Rob Fitts has fabulously transported us back to Mashi’s family roots, childhood passion for the grand game, and his trajectory to become the first Major Leaguer from Japan. It is a discovery and rediscovery of culture, baseball dynamics/politics, and the man who transcended the sport as a gigantic touchstone ‘pioneer’ for future players from Asia.”—Kerry Yo Nakagawa, author of Through a Diamond: 100 Years of Japanese American Baseball
— Kerry Yo Nakagawa