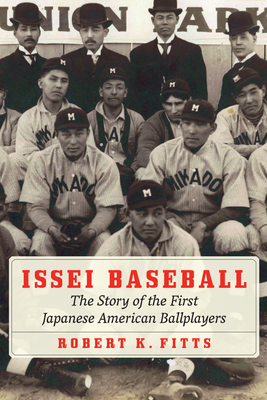 Baseball has been called America’s true melting pot, a game that unites us as a people. Issei Baseball is the story of the pioneers of Japanese American baseball, Harry Saisho, Ken Kitsuse, Tom Uyeda, Tozan Masko, Kiichi Suzuki, and others—young men who came to the United States to start a new life but found bigotry and discrimination.

In 1905 they formed a baseball club in Los Angeles and began playing local amateur teams. Inspired by the Waseda University baseball team’s 1905 visit to the West Coast, they became the first Japanese professional baseball club on either side of the Pacific and barnstormed across the American Midwest in 1906 and 1911. Tens of thousands came to see “how the minions of the Mikado played the national pastime.” As they played, the Japanese earned the respect of their opponents and fans, breaking down racial stereotypes. Baseball became a bridge between the two cultures, bringing Japanese and Americans together through the shared love of the game.

Issei Baseball focuses on the small group of men who formed the first professional and semiprofessional Japanese baseball clubs. These players’ story tells the history of early Japanese American baseball, including the placement of Saisho, Kitsuse, and their families in relocation camps during World War II and the Japanese immigrant experience.

Robert K. Fitts is the author of Mashi: The Unfulfilled Baseball Dreams of Masanori Murakami, the First Japanese Major Leaguer (Nebraska, 2015), Wally Yonamine: The Man Who Changed Baseball (Nebraska, 2008), and Banzai Babe Ruth: Baseball, Espionage, and Assassination during the 1934 Tour of Japan (Nebraska, 2012), winner of the Society of American Baseball Research’s Seymour Medal.

"Robert K. Fitts’s Issei Baseball meticulously tells the important story about the Japanese’s essential role in the history of baseball in a way that not only will inform its readers, but will also ensure that Issei’s story is never forgotten."—R. Zachary Sanzone, NINE: A Journal of Baseball History and Culture

"If you’re a baseball fan missing our national game right now or just someone who wants to learn more about the Issei immigrants and the battles they fought to get the JA community where it is today, I highly recommend Issei Baseball."—Bruce Rutledge, North American Post

"Robert Fitts has made another important contribution to Japanese American history and to the role of baseball in that story, as well as to the history of the United States."—Richard Crepeau, New York Journal of Books

"Issei Baseball is an excellent history of a lesser-known saga involving Japan, America, and the pastime they shared."—Andrew Milner, Inside Game

"While baseball has a long history in Japan, the sport has just as rich of a pedigree in Japanese American communities. Issei Baseball is an encyclopedic look into a game that brought pride to a wider group of people."—JQ Magazine

"For anyone who loves baseball or Japanese culture or, preferably, both . . . this is a fantastic book that covers a less regarded aspect of the origins of the game in Japan."—Ryne Clos, Spectrum Culture

“A book rich in detail, Robert K. Fitts’s Issei Baseball adds a valuable piece to the story of the Japanese people in America and is a noteworthy contribution to the legacy of the Issei and the game they loved.”—Samuel O. Regalado, author of Nikkei Baseball: Japanese American Players from Immigration and Internment to the Major Leagues

“Long before Ichiro Suzuki and Shohei Ohtani, Japanese Issei were trying to prove they were the best immigrant baseball players in America. During the Jim Crow era of Major League Baseball, a handshake and a victory on the field were their just reward. Rob Fitts majestically re-creates the mood of the era and sheds light on a glorious period of this epic American odyssey.”—Kerry Yo Nakagawa, author, filmmaker, and historian


“Rob Fitts is not only an esteemed baseball historian; he’s also one of the top writers in the game today. He excels at painting pictures with words and taking the reader on a journey back in time with his prose. Issei Baseball is an enjoyable read for true baseball fans.”—Bill Staples Jr., coauthor of Gentle Black Giants: A History of Negro Leaguers in Japan