Billy Ball: Billy Martin and the Resurrection of the Oakland A's (Hardcover) 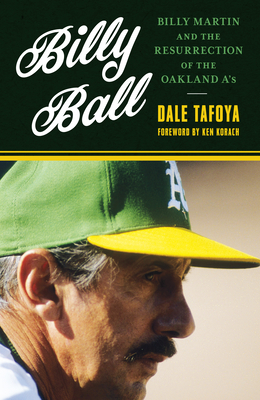 By Dale Tafoya
$24.95
On Our Shelves Now (Please wait for us to confirm and & contact you when it's ready)

In the early 1970s, the Oakland Athletics became only the second team in major-league baseball history to win three consecutive World Series championships. But as the decade came to a close, the A's were in free fall, having lost 108 games in 1979 while drawing just 307,000 fans. Free agency had decimated the A's, and the team's colorful owner, Charlie Finley, was looking for a buyer. First, though, he had to bring fans back to the Oakland Coliseum. Enter Billy Martin, the hometown boy from West Berkeley. In Billy Ball, sportswriter Dale Tafoya describes what, at the time, seemed like a match made in baseball heaven. The A's needed a fiery leader to re-ignite interest in the team. Martin needed a job after his second stint as manager of the New York Yankees came to an abrupt end. Based largely on interviews with former players, team executives, and journalists, Billy Ball captures Martin's homecoming to the Bay area in 1980, his immediate embrace by Oakland fans, and the A's return to playoff baseball. Tafoya describes the reputation that had preceded Martin--one that he fully lived up to--as the brawling, hard-drinking baseball savant with a knack for turning bad teams around. In Oakland, his aggressive style of play came to be known as Billy Ball. A's fans and the media loved it. But, in life and in baseball, all good things must come to an end. Tafoya chronicles Martin's clash with the new A's management and the siren song of the Yankees that lured the manager back to New York in 1983. Still, as the book makes clear, the magical turnaround of the A's has never been forgotten in Oakland. Neither have Billy Martin and Billy Ball. During a time of economic uncertainty and waning baseball interest in Oakland, Billy Ball filled the stands, rejuvenated fans, and saved professional baseball in the city.

Dale Tafoya is author of Bash Brothers: A Legacy Subpoenaed (Potomac Books, 2008) and has followed Oakland A's baseball for thirty years. His work has appeared in the Oakland Tribune, Contra Costa Times, Orlando Sentinel, Modesto Bee, The Source, and Beckett Baseball Card Monthly. In addition to his writing credits, Tafoya has been a guest on ESPN Radio, FOX Sports, Cumulus Media and Comcast Sports. Tafoya resides in the San Francisco-Bay Area.