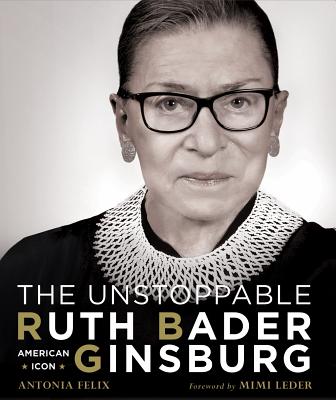 By Antonia Felix, Mimi Leder (Foreword by)
$29.95
On Our Shelves Now (Please wait for us to confirm and & contact you when it's ready)

"This is an adoring photo history that wonderfully shows Ginsburg in her private life as well as public."--Publishers Weekly

This unofficial pictorial retrospective celebrates and honors the barrier-breaking achievements of Supreme Court Justice Ruth Bader Ginsburg (1933-2020), and is the first comprehensive, fully illustrated bio-pic book on her life and work.

Features a foreword by Mimi Leder, award-winning filmmaker and director of the 2018 major motion picture about RBG, On the Basis of Sex.

Not only did Ruth Bader Ginsburg--the second woman appointed to the Supreme Court--possess one of the greatest legal minds of our time, she was an admired cultural icon whose work on behalf of gender equality, and whose unprecedented career itself, indelibly changed American society. This gorgeously illustrated book, published in 2018 on her 25th anniversary as a justice of the Supreme Court, celebrates Ginsburg's legacy with 130 photographs, inspiring quotes, highlights from notable speeches and judicial opinions, and insightful commentary.

Antonia Felix, EdD, MFA, is a New York Times bestselling author of over 20 books. Her political biographies include Elizabeth Warren: Her Fight. Her Work. Her Life; Michelle Obama: A Photographic Journey, and Sonia Sotomayor: The True American Dream. She has appeared frequently on CNN, MSNBC, Fox News, NPR, PBS's Washington Journal, CNN, BBC, and CBS Radio. She lives near Minneapolis, MN. Award-winning filmmaker Mimi Leder director of On the Basis of Sex, was the first woman ever accepted to AFI's prestigious cinematography program. She was director of the feature films The Peacemaker, Deep Impact, and Pay It Forward; HBO's Peabody(R) Award-winning television series The Leftovers; and many episodes of other television shows, including Shameless, The West Wing, L.A. Law, China Beach, and, most notably, ER, which earned her two Emmys(R), four Emmy nominations, and three Directors Guild of America nominations. Leder is executive producer and director of Apple TV's hit award-winning series The Morning Show, starring Jennifer Aniston, Reese Witherspoon, and Steve Carell.