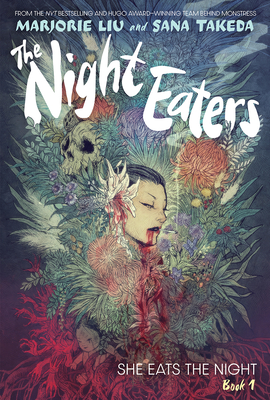 Chinese American twins, Milly and Billy, are having a tough time. On top of the multiple failures in their personal and professional lives, they’re struggling to keep their restaurant afloat. Luckily their parents, Ipo and Keon, are in town for their annual visit. Having immigrated from Hong Kong before the twins were born, Ipo and Keon have supported their children through thick and thin and are ready to lend a hand—but they're starting to wonder, has their support made Milly and Billy incapable of standing on their own?

When Ipo forces them to help her clean up the house next door—a hellish and run-down ruin that was the scene of a grisly murder—the twins are in for a nasty surprise. A night of terror, gore, and supernatural mayhem reveals that there is much more to Ipo and her children than meets the eye.

Eisner Award–winning and bestselling author Marjorie Liu and illustrator Sana Takeda have crafted a wild and wicked tale that will leave readers hungry for more. She Eats the Night is the perfect start to The Night Eaters trilogy, which is a combination of Monsters by Barry Windsor-Smith and Crazy Rich Asians by Kevin Kwan.

Marjorie Liu is an attorney and New York Times bestselling novelist and comic book writer. Her work at Marvel includes the series X-23, Black Widow, Han Solo, Dark Wolverine, and Astonishing X-Men. She is also the cocreator of Monstressfrom Image Comics, which has won multiple Hugo Awards, British Fantasy Awards, the Harvey Award, and five Eisner Awards, making Liu the first-ever woman—and woman of color—to win an Eisner in the best writer category. She lives in Cambridge, Massachusetts. Sana Takeda is a Japanese Hugo and Eisner Award–winning illustrator and comic book artist behind the Monstress series. After having worked as a designer at Sega Corp., she became a freelancer. While drawing for Marvel, she also creates illustrations for games and children's books. Takeda lives in Tokyo.

“She Eats the Night lights everything on fire in the best possible way. This story, this art, the chilling and delicious music they make in harmony with each other—it does not hold back, does not miss. I love every panel and the way they all come together to form something truly spectacular, unnerving, invigorating, inspiring—ALIVE. The pulse of this book gets louder and louder with each turning page, a total masterpiece. Cannot wait to read more.”
— Daniel José Older, the New York Times bestselling author of Star Wars: The High Republic

“The award-winning, bestselling team of Marjorie Liu and Sana Takeda has done it again! She Eats the Night is a beautifully illustrated, well-crafted horror tale that excavates the terrifying truths buried deep within the strange creatures that we call ‘family.’ This amazing graphic novel allows us to devour the darkness that presents itself as comfort and safety. Bold and atmospheric, grotesque and hilarious, this original graphic novel showcases two storytelling masters at the height of their powers.”
— John Jennings, Hugo and Eisner Award–winning author and illustrator

“Creepy, laugh-out-loud funny, and visually stunning, She Eats the Night is a story with depth you can’t put down. Marjory Liu and Sana Takeda have crafted a story of family legacy that gives a whole new meaning to the term ‘Mother from Hell.’ The characters make this story leap from the pages. Horror fans won’t be disappointed.”
— Tananarive Due, author of The Keeper and producer of Horror Noire: A History of Black Horror

“Come for the haunted house, creepy dolls and human-devouring creatures, but stay for the family drama.”
— The New York Times

“Takeda’s delicate inks and glowing watercolors are equally adept at capturing the minutiae of domestic life and a terrifying supernatural underworld of monstrous skeletons, living shadows, hooded figures, and possessed dolls. Her art seems lit from within, turning from sunny and reassuring in one scene to submerged and sinister the next. Fans of stylish contemporary horror comics series like Harrow County and Something Is Killing the Children will eat it all up, then hungrily await the next volume.” ”
— Publishers Weekly STARRED Review

“The Night Eaters features many elements familiar from Monstress: ambiguous characters, grotesque violence, a sense of slow-building horror and, most distinctively, Takeda's astonishing art. This is just Book 1 of Liu and Takeda's new world, so be ready to hear a lot more about Night Eaters for some time to come.”
— NPR

“Expect to hear Liu and Takeda’s names ring out prominently in the next award season and add The Night Eaters to the strong roster of original graphic novels produced so far in the 2020s.”
— Forbes

“Sana Takeda delivers nuanced character interaction and visceral horror with aplomb. Liu’s script alternates scenes of present-day action with flashbacks exploring Ipo and her husband Keon’s courtship, their early careers in the Hong Kong film industry, and the decision to immigrate to the United States. This enriches the emotional stakes of the story and builds to a shocking reveal and exciting, cliffhanger ending.”
— Library Journal

“Terrifying in the best way.”
— Polygon

"Monstress co-creators Marjorie Liu and Sana Takeda seem to work in perfect synchronicity… A masterpiece of magical surrealist horror in both script and art… This book ratchets up the tension page by page."
— Newsarama

“When author Marjorie Liu and illustrator Sana Takeda team up, you know your eyes and imagination will be feasting.”
— The Mary Sue

“Get ready to be terrified… This is a sharply written, gorgeously illustrated graphic novel that you probably shouldn’t read right before bed.”
— Buzzfeed

“Liu and Takeda have combined their immense talents again.”
— io9

“A must for all Horror fans, also for fans of stunning artwork, great character development, or perfectly executed slow burns… The Night Eaters Book 1 has sunk its claws into me, and I'm not sure I'll be able to stop thinking about it for a while to come.”
— Pop Culture and Comics

“horror heaven… A book about family, demons, and expectations that’s as disturbing as it is funny. She Eats the Night is an achievement.”
— Comics Beat

“The Night Eaters: She Eats The Night isn’t the book that you think that it is, in the best way imaginable.”
— Popverse

“Writer Marjorie Liu and artist Sana Takeda are more than tellers of stories: they are makers of worlds.”
— Forbes

“There’s some real magic that happens when writer Marjorie Liu and artist Sana Takeda get together.”
— AIPT

“It’s like Liu and Takeda plucked a dream project from my head and made it real.”
— Multiversity

“Every so often, a graphic novel comes along, rips through your psyche, and leaves a nice, little mark, ensuring you’ll never forget it. The Night Eaters: She Eats the Night (Book 1) is that for me. A beautiful, horrific tale of love, parental guidance, and a family learning to come together under the strangest of circumstances.”
— Fanbase Press

“Excellently crafted.. Liu’s writing pulls together all the various themes and concepts presented in The Night Eaters: She Eats The Night Book 1 into one harmonious whole in a way that I never would’ve thought possible. … The cloudy, ethereal nature of Takeda’s style lends itself perfectly to a horror story. … The blending of family and classic haunted house horror comes together to create something truly unique.”
— But Why Tho?

“An inventive take on Asian horror that is a wonderful mix between gory and funny.”
— Geek Dad

“This team is very skillful at creating rich worlds full of terror and characters who fascinate and are compelling.”
— Panel Patter