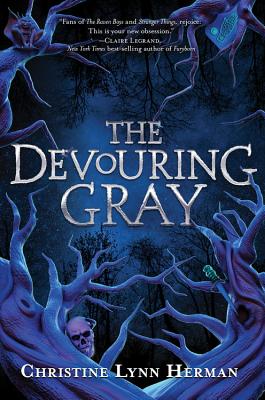 This is book number 1 in the The Devouring Gray series.

“When mutilated bodies start to show up in the small town of Four Paths in rural upstate New York, the townsfolk know it can only mean one thing: The Gray is back. Existing on an alternate plane, The Gray (not unlike the Demogorgon/Upside Down in Stranger Things) has been terrorizing the town since its inception but the founding families of Four Paths have always been able to keep it from crossing over. This time, dark familial secrets could allow The Gray to break through, and it’s up to four teen descendants of the founders to set aside their differences to keep the terror at bay. Gripping and terrifying, The Devouring Gray will have you sleeping with one eye open, if at all.”
— Javier Ramirez, The Book Table, Oak Park, IL

“The Devouring Gray has everything that makes Stranger Things and The Raven Cycle so appealing to readers: a dark and enthralling atmosphere, a creeping sense of dread, and, above all, a cast of teen characters who feel truly alive. This is the height of what YA urban fantasy can be.”
— Kiersten Frost, Brookline Booksmith, Brookline, MA

"Fans of The Raven Boys and Stranger Things rejoice: This is your new obsession." —Claire Legrand, NYT bestselling author of Furyborn

After the death of her sister, seventeen-year-old Violet Saunders finds herself dragged to Four Paths, New York. Violet may be a newcomer, but she soon learns her mother isn't: They belong to one of the revered founding families of the town, where stone bells hang above every doorway and danger lurks in the depths of the woods.

Justin Hawthorne's bloodline has protected Four Paths for generations from the Gray—a lifeless dimension that imprisons a brutal monster. After Justin fails to inherit his family's powers, his mother is determined to keep this humiliation a secret. But Justin can't let go of the future he was promised and the town he swore to protect.

Ever since Harper Carlisle lost her hand to an accident that left her stranded in the Gray for days, she has vowed revenge on the person who abandoned her: Justin Hawthorne. There are ripples of dissent in Four Paths, and Harper seizes an opportunity to take down the Hawthornes and change her destiny—to what extent, even she doesn't yet know.

The Gray is growing stronger every day, and its victims are piling up. When Violet accidentally unleashes the monster, all three must band together with the other Founders to unearth the dark truths behind their families' abilities...before the Gray devours them all.

C. L. Herman is the New York Times, USA Today, and indie bestselling author of atmospheric, magical novels, including the All of Us Villains duology, The Devouring Gray duology, and The Drowning Summer. Currently, she resides in Massachusetts with her partner and cat. To learn more, follow them on Instagram @cl_herman, sign up for their newsletter, or visit clherman.com.

"By the end of page one, I was hooked. By the end of chapter one, I was entranced. The pages of this book breathe and shiver and thrum, just like the trees of Herman's deliciously eerie woods. These characters are unforgettable; the imagery is sublime. Fans of The Raven Boys and Stranger Things rejoice: This is your new obsession."—Claire Legrand, New York Times best-selling author of Furyborn

"A grimly exhilarating tale of monsters in the woods and monstrous family legacies-and teens brave enough to fight them both. This New England Gothic will devour you."—Rosamund Hodge, author of Cruel Beauty and Crimson Bound

"The Devouring Gray is an irresistible blend of unforgettable characters and spine-tingling horror. Full of witchy atmosphere; lush, detailed writing; and a trope-breaking, endearing group cast, this book will ensnare you and leave you deliciously haunted. A stunning debut."—Amanda Foody, author of Ace of Shades and Daughter of the Burning City

"[A] riveting debut... Complex characters and creepy concepts will leave readers chomping for the next volume."—Kirkus Reviews

"Herman crafts an intriguing thriller that tantalizingly parses out its reveals. Fans of Stiefvater's The Raven Boys (BCCB 9/12) will enjoy many similar elements here, from tarot-inspired fortune-telling to powerful friendships between the main characters; the personalities are realistic and nuanced, and two bisexual leads propel a deliciously messy tangle of love interests. The story especially thrives where it depicts the grief process and in its moral ambiguity. This page-turner is topped off with a satisfying conclusion that has enough intriguing open ends to make readers impatient for its sequel."—BCCB

"This moody, atmospheric debut has plenty of appeal for teen horror readers. Fans of Claire Legrand's Sawkill Girls (2018) and the CW's Riverdale will find much to appreciate."—Booklist