Before The Big Bang: The Origin of the Universe and What Lies Beyond (Hardcover) 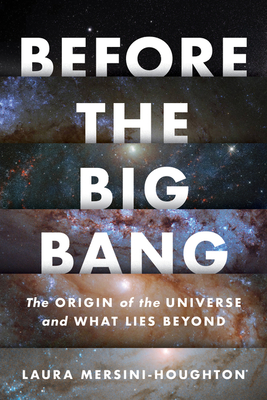 "A riveting tour of the cosmos from one of the brightest minds in astrophysics." —The Washington Post

What came before the Big Bang, and what exists outside of the universe it created? Until recently, scientists could only guess at what lay past the edge of space-time. However, as pioneering theoretical physicist Laura Mersini-Houghton explains, new scientific tools are now giving us the ability to peer beyond the limits of our universe and to test our theories about what is there. And what we are finding is upending everything we thought we knew about the cosmos and our place in it.

Mersini-Houghton is no stranger to boundaries—or to pushing through them. As a child growing up in Communist Albania, she discovered a universe beyond her walled-off world through the study of math and science, and through music. As a female cosmologist in a male-dominated field, she transcended the limits that society and her profession tried to place on her. And as a trailblazing researcher, she helped to revolutionize the study of our universe by revealing that, far from living in a cosmic Albania, with a world that ends at its borders, we are part of a larger family of universes—a multiverse—that holds wonders we are only beginning to unlock. Mersini-Houghton’s groundbreaking research suggests that we sit in a quantum landscape whose peaks and valleys hide a multitude of other universes, and even hold the secret to the origins of existence itself. Recent evidence has revealed the signatures of such sibling universes in our own night sky, confirming Mersini-Houghton’s theoretical work and offering humbling evidence that our universe is just one member of an unending cosmic family.

The incredible scientific saga of one woman’s mind-expanding journey through the multiverse, Before the Big Bang will reshape our understanding of humanity’s place in the unfathomable vastness of the cosmos.

LAURA MERSINI-HOUGHTON is an internationally renowned cosmologist and theoretical physicist and is one of the world’s leading experts on the multiverse and the origins of the universe. Currently, she is a professor of theoretical physics and cosmology at the University of North Carolina at Chapel Hill, and a visiting professor at the Department of Applied Mathematics and Theoretical Physics at the University of Cambridge. She has been the subject of hundreds of articles in leading popular science magazines and has appeared on the Science Channel’s Through the Wormhole with Morgan Freeman, as well as on documentaries on the Discovery Channel and the BBC. She lives in Chapel Hill, North Carolina.

"A riveting tour of the cosmos from one of the brightest minds in astrophysics." — Washington Post

“Before the Big Bang presents a fascinating cosmological narrative....Mersini-Houghton tackles cosmology’s toughest questions with the type of intellectual rigor rarely on display in a book aimed at a mainstream audience....she deserves kudos for tackling such extremely complicated material in a way that finds synergy between her own life and that of the history of the cosmos." — Forbes

“Laura Mersini-Houghton’s Before the Big Bang provides a fascinating account of the background and underlying motives for her intriguing proposal for the physical principles that may have governed the explosive origin of our universe.” — Roger Penrose, University of Oxford, Nobel laureate, and author of Cycles of Time and The Road to Reality

"From one of the world's most renowned cosmologists, Before the Big Bang offers insights into the Big Bang and, beyond it, into the majestic world of a quantum multiverse. The tale of Laura Mersini-Houghton’s journey of discovery, interlaced with her personal stories of growing up in communist Albania and breaking free of its confines, makes for a fascinating read." — Stephon Alexander, Brown University, and author of Fear of a Black Universe and The Jazz of Physics

"What if our universe, vast though it may be, is but an infinitesimal fragment of reality? What would this ‘multiverse’ be like? What would be the implications? And how could we possibly test the idea? There is no better guide to the bizarre, and sometimes paradoxical, cosmic super-realm than Laura Mersini-Houghton, who has devoted her research to seeking the tell-tale signs in the sky hinting that our universe is indeed not alone." — Paul Davies, Arizona State University, and author of What's Eating the Universe?: And Other Cosmic Questions

“You may not have anticipated that you would cheer upon hearing of the discovery of a ‘giant void,’ but such are the unanticipated pleasures of this book……[Mersini-Houghton’s] narrative approach brings a pleasurable rhythm of bafflement, detective work and discovery to the story, most intriguingly when it describes how her theory is supported by evidence…a fascinating and unusual hybrid of pop science and memoir.” — The Telegraph

"An enthusiastic exploration of the early universe." — Kirkus Reviews