She Who Became the Sun (The Radiant Emperor Duology #1) (Paperback) 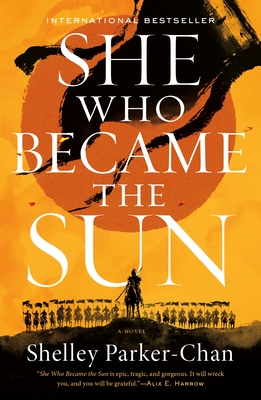 This is book number 1 in the The Radiant Emperor Duology series.

“Zhu’s tooth-and-nail fight for her destiny merges hero and antihero into a transcendent figure with an incomparably strong will. She Who Became the Sun carves out a bold and bloody new genre of epic fantasy.”
— Jessie Prutisto-Chang, Third Place Books, Lake Forest Park, WA

"Magnificent in every way."—Samantha Shannon, author of The Priory of the Orange Tree

She Who Became the Sun reimagines the rise to power of the Ming Dynasty’s founding emperor.

To possess the Mandate of Heaven, the female monk Zhu will do anything

“I refuse to be nothing…”

In a famine-stricken village on a dusty yellow plain, two children are given two fates. A boy, greatness. A girl, nothingness…

In 1345, China lies under harsh Mongol rule. For the starving peasants of the Central Plains, greatness is something found only in stories. When the Zhu family’s eighth-born son, Zhu Chongba, is given a fate of greatness, everyone is mystified as to how it will come to pass. The fate of nothingness received by the family’s clever and capable second daughter, on the other hand, is only as expected.

When a bandit attack orphans the two children, though, it is Zhu Chongba who succumbs to despair and dies. Desperate to escape her own fated death, the girl uses her brother's identity to enter a monastery as a young male novice. There, propelled by her burning desire to survive, Zhu learns she is capable of doing whatever it takes, no matter how callous, to stay hidden from her fate.

After her sanctuary is destroyed for supporting the rebellion against Mongol rule, Zhu takes the chance to claim another future altogether: her brother's abandoned greatness.

Shelley Parker-Chan is an Australian by way of Malaysia and New Zealand. A 2017 Tiptree Fellow, she is the author of the historical fantasy novel She Who Became the Sun. Parker-Chan spent nearly a decade working as a diplomat and international development adviser in Southeast Asia, where she became addicted to epic East Asian historical TV dramas. After a failed search to find English-language book versions of these stories, she decided to write her own. Parker-Chan currently lives in Melbourne, Australia, where she is very grateful to never have to travel by leaky boat ever again. She won the Astounding Award for Best New Writer in 2022.

Praise for She Who Became the Sun

“The characters are bold and complex in this story of fealty, family, and self. Epic worldbuilding, high action, and ruthless shades of love and desire make the tale at turns tragic and inspiring... Parker-Chan’s debut is forceful, immersive, and unforgettable. This inspired queer retelling of Chinese history is an exciting read.” —Library Journal, starred review

“Parker-Chan’s gorgeous writing accompanies a vibrantly rendered world full of imperfect, fascinating characters. With every turn of the page, the book offers a new set piece, a new revelation, a new horror.... If you’re a fan of epic fantasy, you can’t miss this one.”—BookPage, starred review

“Parker-Chan’s novel is an epic tale of the power of desire, the role of free will in deciding a person’s fate, and the twisting machinations of power. Zhu is a powerful queer anti-hero, her means sometimes questionable, her desire overflowing.... The plots and betrayals that swirl around the book’s events are themselves intensely compelling, but it is Zhu’s strength of will and passion that give this novel its spark.”—Booklist, starred review

“In the book’s opening chapters, Parker-Chan masterfully balances poetry and tension, keeping the reader flying through the pages as they watch Zhu gain a foothold in life… this is an important debut that expands our concept of who gets to be a hero and a villain, and introduces a pair of gender disruptors who are destined to change China – and the LGBTQ fantasy canon – forever.”—USA Today

“Striking.... The exploration of gender and sexuality, the sensuous romance, the vivid world-building, the flashes of tongue-in-cheek humor and human emotion set up against the epic plot. There are close, intimate scenes and climactic battle sequences that made me feel like I was watching a movie.... The book flare[s] with power.”—Popsugar

“Magnificent in every way. War, desire, vengeance, politics – Shelley Parker-Chan has perfectly measured each ingredient of this queer historical epic. Glinting with bright rays of wit and tenderness, yet unafraid to delve into the deep shadows of human ambition, She Who Became the Sun, like Zhu, is unquestionably destined for greatness.”—Samantha Shannon, author of The Priory of the Orange Tree

“Evocative and heartrending, Parker-Chan's debut is a poetic masterpiece about war, love, and identity…. It stabbed me through the heart then salted and set fire to the wound.”—S.A. Chakraborty, international bestselling author of The Daevabad Trilogy

“An exhilarating rise to power that takes you from palace to village to battlefield, in a world that is stunningly alive. Parker-Chan’s exquisitely wrought prose brings light and nuance to the novel’s immense themes of gender, power and fate. An instant classic.”—C.S. Pacat, USA Today bestselling author of the Captive Prince Trilogy

“She Who Became the Sun is epic, tragic, and gorgeous. It will wreck you, and you will be grateful.”—Alix E. Harrow, Hugo Award winner Alix E. Harrow, author of The Ten Thousand Doors of January

“Parker-Chan unrolls the painted scroll of her epic tale with the control of a master storyteller, revealing a dazzling new world of fate, war, love and betrayal. Fantasy will never be the same.”—Zen Cho, award-winning author of the Sorcerer to the Crown series

“Zhu is a hero unlike any other - her propulsive desire to survive at any cost powers a glorious novel that encompasses grand betrayal, love, loss and triumph. An unforgettable debut.”—A. K. Larkwood, author of The Unspoken Name

“She Who Became the Sun is an intense and sweeping epic that blurs the lines between rebellion and revenge, between fate and ambition, exposing the inherent violence of gendered ideologies and the traumas they create in ourselves and the world.”—Tessa Gratton, author of The Queens of Innis Lear

“Shelley Parker-Chan's debut novel is a sweeping epic rendered in elegant prose. Arresting, beautiful, grand in scope and yet intimately poignant, readers will be drawn into this deftly written fantasy.”—Rowenna Miller, author of the Unraveled Kingdom series

“A gripping tale of rise to power, fate, betrayals and the bloody beginnings and endings of dynasties. Heartbreaking, stirring, haunting.”—Aliette de Bodard, Nebula-award winning author of Seven Of Infinities

“Stunning, powerful and complex, there are no heroes in this tale, and people knowingly do terrible things. And you'll love them for it…. Parker-Chan is a major new voice in historical fantasy.”—Anna Stephens, author of the Godblind Trilogy

“Instantly enthralling. Zhu is canny, charming, and ruthless as she claims her own fate in a richly detailed world, challenging dynasties and gender in the process.”—Malinda Lo, author of Ash and Huntress

“An absolute stunner... The story, much like the characters, is ambitious and clever and the depth of emotion Parker-Chan is able to tap into without ever becoming maudlin is astounding... There's war and violence and betrayal (oh the betrayal) and destiny both embraced and defied. Incredible work. Cannot wait for the next one.”—Rebecca Roanhorse

“A rich and deeply layered story.... It turns several centuries’ worth of stories and assumptions on their heads in the best way possible.... She Who Became the Sun is a historical fantasy that’s meticulously researched, its worldbuilding rich and thorough. This is the sort of story that will not only have you digging into the history of the Ming dynasty in your spare time but hoping that the real story might have actually gone down this way.”—Culturess

“A brutal book of war and famine, She Who Became the Sun by Shelley Parker-Chan is a queer reimagining of the founding of China’s Ming dynasty that has no business being as poetic as it is. (That is not a dig. The prose in this book is beautiful.)”—The Geekiary

“An astonishing debut novel.... It is rich with Chinese history and culture, which is always refreshing in a sea of Eurocentric epic fantasy novels…. Parker Chan is following in the footsteps of her own characters. Carving a name for herself in history, and telling a story that might change the worlds of those who read it.”—Comic Years

“Parker-Chan’s fascinating debut, the first in the Radiant Emperor duology, gives the historical Red Turban Rebellion a grimdark fantasy twist... Her nuanced exploration of gender identity and striking meditation on bodily autonomy set this fantasy apart. Fans of Asian-influenced fantasy have just been given their newest obsession.”—Publisher's Weekly

“A bold, breathtaking historical fantasy debut seething with intrigue and action.... Vibrant and passionately inventive, She Who Became the Sun gives the aphorism 'live life like your head is on fire' dazzling new meaning.”—Shelf Awareness

“A genderbent, queer, light retelling of the fall of the Yuan Dynasty and the life of the first Ming Emperor (real-life Zhu Chongba, 1328-1398) is full of sweeping storytelling, gripping plot, and epic worldbuilding and doesn’t require a prior knowledge of the history covered. VERDICT: An exciting and thought-provoking epic will have readers breathless and waiting for the next installment.”—School Library Journal Reviews

“Compelling and intense. The political scheming here makes the A Song of Ice and Fire series look like child’s play. This book is packed with action and adventure, and even the quieter moments thrum with tension. The writing is sharp, keen, and droll. Parker-Chan’s narrative style is a delight to read... While I’m at it, I might as well add [She Who Became the Sun] to my top ten books of 2021. We still have half the year to go, but it’ll be a tough one to beat.”—Locus Magazine

“The best epic fantasy book of the season.... Rich with historical detail, emotionally powerful, and brilliantly plotted, She Who Became the Sun is a thrilling story of forging your own destiny.”—BookBub

“Easily one of the year’s best books.”—BookPage