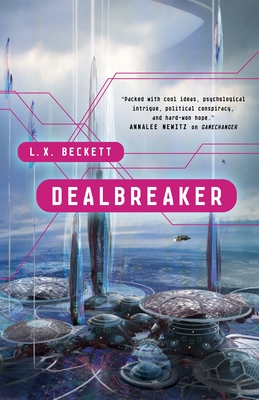 This is book number 2 in the The Bounceback series.

L. X. Beckett's Dealbreaker is the thrilling sci-fi sequel to Gamechanger, perfect for fans of Neuromancer and Star Trek

Rubi Whiting has done the impossible. She has proved that humanity deserves a seat at the galactic table. Well, at least a shot at a seat. Having convinced the galactic governing body that mankind deserves a chance at fixing their own problems, Rubi has done her part to launch the planet into a new golden age of scientific discovery and technological revolution.

However, there are still those in the galactic community that think that humanity is too poisonous, too greedy, to be allowed in, and they will stop at nothing to sabotage a species determined to pull itself up.

Toronto author and editor L. X. Beckett frittered their misbegotten youth working as an actor and theater technician in Southern Alberta, before deciding to make a shift into writing science fiction. Their first novella, “Freezing Rain, a Chance of Falling,” was published in the Magazine of Fantasy and Science Fiction in 2018, and takes place in the same universe as Gamechanger and Dealbreaker. Lex identifies as feminist, lesbian, genderqueer, married, and Slytherin, and can be found on Twitter or at a writing advice blog, the Lexicon.

“Driven by joyful confidence that the reader—like the characters—will accept huge helpings of razzle-dazzle strangeness. The result is as delightful as it is mind-bending.” —Publishers Weekly, starred review

“Intricate....[S]trewn with hashtags and trademarks that emphasize a world driven by greed, power, and the importance of trending.” —Booklist

“A visionary glimpse into the future.” —Kirkus Reviews

“A thought-provoking and, at times, frightening peek into possibilities of the future.” —Booklist

“Readers will delight in the nonbinary characters, LBGTQ relationships and identities, and the land acknowledgment statement at the end of the book. Highly recommended.” —Library Journal, starred review