This Is How: Surviving What You Think You Can't (Paperback) 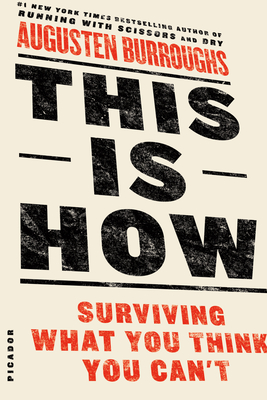 From the #1 New York Times bestselling author of Running With Scissors comes a groundbreaking book by Augusten Burroughs that explores how to survive what you think you can't.

If you're fat and fail every diet, if you're thin but can't get thin enough, if you lose your job, if your child dies, if you are diagnosed with cancer, if you always end up with exactly the wrong kind of person, if you always end up alone, if you can't get over the past, if your parents are insane and ruining your life, if you really and truly wish you were dead, if you feel like it's your destiny to be a star, if you believe life has a grudge against you, if you don't want to have sex with your spouse and don't know why, if you feel so ashamed, if you're lost in life, if you have ever wondered, How am I supposed to survive this?

Augusten Burroughs is the author of Running with Scissors, Dry, Magical Thinking: True Stories, Possible Side Effects, A Wolf at the Table and You Better Not Cry. He is also the author of the novel Sellevision, which has been optioned for film. The film version of Running with Scissors, directed by Ryan Murphy and produced by Brad Pitt, was released in October 2006 and starred Joseph Cross, Brian Cox, Annette Bening (nominated for a Golden Globe for her role), Alec Baldwin and Evan Rachel Wood. Augusten's writing has appeared in numerous magazines and newspapers around the world including The New York Times and New York Magazine. In 2005 Entertainment Weekly named him one of "The 25 Funniest People in America." He resides in New York City and Western Massachusetts.

“Fans of the author's massively popular confessional memoirs will likely agree with that statement, and all of the wisdom he dispenses in his new book -- delivered with the dark, acidic humor we've come to expect -- is certainly well-earned.” —The Boston Globe