Welcome Home: The Lucky Ones (Paperback) 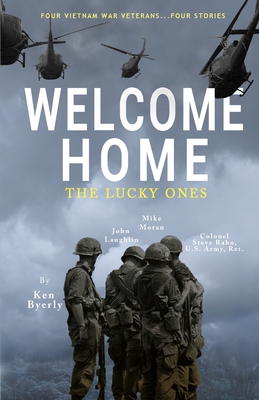 The sound of helicopter blades chopping through the air as they swiftly fly away into the distance, the eerie quietness before the buzzing of bullets zipping past the protective helmets, and the blasts of heavy shelling disturbing the ground. These were the familiar sounds heard once a drop was made leaving American soldiers in unfamiliar terrain to fight and fend off the enemy.

The Vietnam War took place between 1955 and 1975. This war saw the communist government of North Vietnam pitted against South Vietnam and its leading ally, the United States. The war was costly and controversial with more than 3 million people losing their lives including over 58,000 Americans and more than half of the total dead being Vietnamese civilians. The Vietnam War was a long and difficult war that caused casualties, impacted families, and created brave heroes who lived to tell their story today.

"Welcome Home The Lucky Ones" chronicles the tales of four brave American soldiers who served in the Vietnam War only to return home to the United States to find a bitterly divided opposition. Journey through the lives of Ken Byerly, John Laughlin, Mike Moran, and Colonel Steve Raho as they retell their time spent training in the Army and Air Force, leading up to the experiences and hardships they endured on the ground and in the air over Vietnam, to how the war shaped their lives upon their return back home.