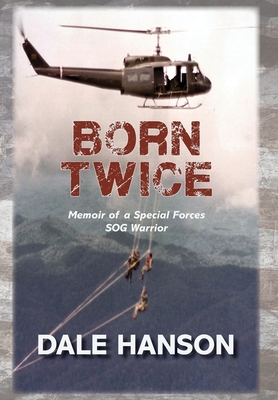 "...a near-unbelievable story of deadly missions carried out by small Green Beret-led teams operating deep in enemy territory against all but impossible odds."

-Michael P Buckland, Special Forces SOG warrior
"These were extremely dangerous, top secret operations, which tested Hanson's mettle; the Christian values of his youth...shone brightly. Read this book and you'll agree with the Green Berets who knew him: Hanson is one of the best."-Maj. John Plaster, Ret. Special Forces, SOG author
"Born Twice takes the reader from the bitterly cold Minnesota winters of his youth to leading a MACV-SOG recon team in the steaming jungles of Southeast Asia. If you want to know what it was like to run reconnaissance missions into denied areas during the Vietnam War, then Born Twice is a book you must read." -Dennis J. Cummings, author of The Men Behind the Trident: SEAL Team One in Vietnam
"Dale Hanson was given the name Kam Baw Ya Chin, meaning 'eternal life, never die' by his Chinese mercenary counterparts in the secret Special Forces projects during the Viet Nam war. After reading some of his near death experiences, this name seems fitting. It may seem contradictory to be at once a committed Christian and a lethal Green Beret, but Hanson was and is. Highly recommended." -Major John "Doc" Padget, Special Forces Ret.
"Hanson brilliantly sets the stage for being hunted by communist soldiers on the ground in Laos in the dark of night, casually mentioning the damage his fingers sustained following face-to-face combat with three AK-47-firing enemy soldiers. Then he deftly shifts gears, taking you through his childhood in Ojibway country in northern Minnesota and his coming of age before joining the Army. Both aspects of this proud Green Beret's history make for a fascinating read. This isn't his first book and I hope it's not his last." -John Stryker Meyer, author of Across the Fence: The Secret War in Vietnam, On The Ground and SOG Chronicles: Volume One