Daughter of the White Rose (Paperback) 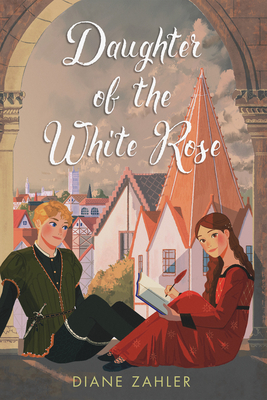 Can a common girl save a prince trapped in the Tower of London?

Nell Gould is the daughter of the royal butcher, a commoner, but she has been raised as the playmate of King Edward and Queen Elizabeth's royal children: Princess Cecily, Princess Bess, Prince Dickon, and Prince Ned, heir apparent and Nell's best and closest friend. They think alike, her and Ned, preferring books and jousts to finery and gossip and the sparkle of the court. But when King Edward dies, Prince Ned is imprisoned in the Tower of London by his scheming uncle, the evil Richard III--and Nell with him. Can they escape? Is Nell the key?

Based on the real royal scandal of the Princes in the Tower, Daughter of the White Rose covers a shocking episode in medieval history that has captured the imagination for 530 years. A story of murder, betrayal, resilience, and growing up, this girl-led medieval middle-grade novel will make a perfect companion to Catherine, Called Birdy and The Mad Wolf's Daughter.

Diane Zahler is the author of many books for young readers, both fiction and nonfiction, including THE THIRTEENTH PRINCESS, PRINCESS OF THE WILD SWANS, and DAUGHTER OF THE WHITE ROSE. Her books have been Junior Library Guild Selections, Golden Sower Award Nominees, and Bank Street Best Books of the Year. A full-time writer, she lives in New York with her husband.

"Characters both real and imaginary inhabit this multilayered, dramatic interpretation of royal intrigue. . . . A quick-paced foray into English history and one girl’s self-discovery."—Kirkus Reviews

"Interesting, engaging, and well-written. . . . Nell spends her childhood as a friend of the young prince, and then grows up quickly as a companion of an exiled king. . . . Well described."—The Historical Novel Society

"Nell is a fiercely determined girl who faces loss and disappointment but is stronger for it. . . . Readers who love historical fiction featuring strong female characters and suspenseful court intrigue will enjoy this story that’s perfect for fans of Karen Cushman, Tamora Pierce, and Diane Magras."—School Library Journal

"In an accessible, uncluttered style, [Zahler] delicately balances historical fact with our own contemporary values. It’s especially refreshing that Nell’s literacy. . .  leads her to the works of medieval women writers for consolation and inspiration for her own future."—The Horn Book

"[Readers] will appreciate Zahler’s handling of the claustrophobic setting. . . . A timeline anchoring plot to real history will also guide interested readers in their own investigations."—The Bulletin of the Center for Children’s Books

"Nell’s first-person narration paints a clear picture of life in the late Middle Ages. . . . Fast-paced and exciting, Daughter of the White Rose brims with the promise of romance and the threat of violence without ever leaving middle-grade territory.  The author weaves fact and fiction into a seamless tapestry, so that readers unfamiliar with the true story won’t know what is real and what isn’t, until they read the helpful afterword, author’s note, and timeline. . . . Fans of historical fiction of similar time periods by Avi or Karen Cushman would enjoy it very much."—Youth Services Book Review

"Good for those seeking examples of… resilience and courage."—School Library Connection

"[Nell]’s smart and determined, and won’t allow herself to be pressed into a mold based on anyone else’s expectations for her. . . . Readers who liked Clifton Chase and the Arrow of Light by Jaimie Engle should give this one a read."—The Story Sanctuary