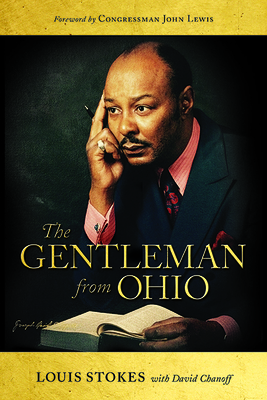 By Louis Stokes, David Chanoff, John Lewis (Foreword by)
$24.95
Usually Ships To the Store in 1-5 Days
This book cannot be returned / is non-refundable.

Louis Stokes was a giant in Ohio politics and one of the most significant figures in the U.S. Congress in recent times. When he arrived in the House of Representatives as a freshman in 1969, there were only six African Americans serving. By the time he retired thirty years later, he had chaired the House Special Committee on the Kennedy and King assassinations, the House Ethics Committee during Abscam, and the House Intelligence Committee during Iran-Contra; he was also a senior member of the powerful House Appropriations Committee.

Prior to Louis Stokes’s tenure in Congress he served for many years as a criminal defense lawyer and chairman of the Cleveland NAACP Legal Redress Committee. Among the Supreme Court Cases he argued, the Terry “Stop and Frisk” case is regarded as one of the twenty-five most significant cases in the court’s history. The Gentleman from Ohio chronicles this and other momentous events in the life and legacy of Ohio’s first black representative—a man who, whether in law or politics, continually fought for the principles he believed in and helped lead the way for African Americans in the world of mainstream American politics.

David Chanoff has written on current affairs, foreign policy, education, refugee issues, literary history, and other subjects for such publications as The New York Times Magazine, The Wall Street Journal, The New Republic, The New York Review of Books, The Washington Post, and The American Scholar. He is the author or coauthor of fifteen books.

“Shortly before his death in 2015, Louis Stokes finished his autobiography, The Gentleman from Ohio. With this book, he bestows his last gift to the American public with this remarkable chronicle of his rise from poverty in Cleveland to the halls of power in Washington, DC, as the first black congressman from Ohio.”  —Henry Louis Gates Jr.


Louis Stokes was an icon in America’s political and moral life. He finished writing his autobiography, The Gentleman from Ohio, only days before his death at age 90. In precise and vivid prose, and with the wisdom of years, Stokes paints a picture of America’s travails and triumphs as the nation made its way from an era of stark racism to one of better hope. Stokes rose from the housing projects in Cleveland to the heights of power in Congress. He was an outsider who became an ultimate insider, but one who never ceased fighting for the poor, the hard-pressed, the exploited, not just in Ohio but nationwide, and not just for African Americans but for all those in need of a champion. Louis Stokes’s unique personality and character shine through in this book. Full of humor, graciousness, anger, and glowing optimism, The Gentleman from Ohio is an essential read.” —Vernon Jordan

“Louis Stokes was a patriot in the finest sense of the word: absolutely committed to our country, and to making it better. In every arena, Lou insisted that America make real the full promise of our democracy. A man of humble beginnings and high principles, Congressman Stokes broke through historic prejudice to become a trailblazing leader in the House of Representatives. Through his autobiography, Lou has preserved the stories of 30 years of groundbreaking achievement in the House—and the wisdom from a lifetime of leadership beyond.” —House Democratic Leader Nancy Pelosi


“Two days before the historic 2008 election, my wife Connie Schultz and I had the great honor of standing backstage with civil rights icons Congressman Lou Stokes, Rev. Otis Moss, and Edwina Moss, while more than 80,000 people waited for Senator Barack Obama to take the stage. I listened as three veterans of the American civil rights movement swelled with pride at seeing their generation’s hard-won victories make possible the election of our first black president—and I knew this was a profound moment I would carry with me for the rest of my life. Now readers have the chance to experience their own unique glimpses into history through the pages of Congressman Stokes’s memoir. His message is an invaluable part of American history, and his wisdom and experiences remain deeply relevant to the continued struggle for equality in America today.” —U.S. Senator Sherrod Brown


“Lou Stokes, who I was privileged to serve with in Congress, grew up using a big stick to fend off those who had designs on relieving him and his brother Carl of the food that was donated by the church to feed their family. He rose to become a defender of our nation in the U.S. Army and a giant in the U.S. Congress. He effectively wielded a “big stick” in defense of the poor and dispossessed as a cardinal on the Appropriations Committee of the U.S. House of Representatives. A gentle man in spirit, Lou was the epitome of a gentleman in the House. I was privileged to learn at his knees and benefit from his friendship. It is no exaggeration to say that I stand on the broad shoulders of the gentleman from Cleveland, Ohio, the Honorable Lou Stokes.” —Congressman James Clyburn


"The Gentleman from Ohio is a beautiful testament to familial and community kinship, and an enthralling story of individual spirit.”—Nishani Frazier, H-FedHist


“A book to inspire everyone who believes in a distant dream. Congressman Stokes showed us strength reinforced by generosity. Trailblazer. Sage. A giant oak in the forest. He and his brother honored the callouses on their mother’s hands by lighting the path for everyone.” —Diane Sawyer

“I spent many summers in Akron, Ohio, visiting my grandparents and heard countless stories about Louis Stokes. He was an icon in Ohio. Congressman Stokes and his brother, Carl, were instrumental in reshaping America’s political landscape. They were a stellar example of black legislators being as capable and dedicated as anyone else. This book is not just about politics; it’s about something we can all agree on—that a loving family can inspire us to do remarkable things in life. And once you read this, you’ll fully understand why Louis Stokes will always be known as the ‘gentleman from Ohio.’” —Robin Roberts, Good Morning America