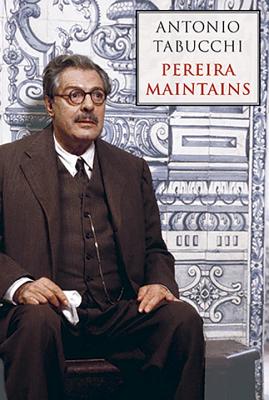 By Antonio Tabucchi, Patrick Creagh (Translated by)
$14.95
On Our Shelves Now (Please wait for us to confirm and & contact you when it's ready)

Pereira Maintains is a story of how a journalist, a member of the bourgeoisie and a reluctant catholic, awakens to the growing fascism in his home country of Portugal. It is a slow road that he takes, and one that leaves his readers unsure as to which direction he will travel... the tension mounts in an almost unnoticeable way as Pereira drinks his lemonades, talks to his dead wife's photograph, and muses on the ressurection of the body. If you are concerned about the current fascist creep and about ready to give up on the bourgeoisie who fret about punching Nazis, let Pereira be your hope. Not all is lost!

Dr. Pereira is an aging, lonely, overweight journalist who has failed to notice the menacing cloud of fascism over Salazarist Lisbon. One day he meets Montiero Rossi, an aspiring young writer whose anti-fascist fervor is as strong as Pereira’s apolitical languor. Eventually, breaking out of the shell of his own inhibitions, Pereira reluctantly rises to heroism—and this arc is “one of the most intriguing and appealing character studies in recent European fiction” (Kirkus).

Antonio Tabucchi was born in Pisa in 1943 and died in Lisbon, his adopted home, in 2012. Over the course of his career he won France’s Medicis Prize for Indian Nocturne, the Italian PEN Prize for Requiem, and the Aristeion Prize for Pereira Maintains. A staunch critic of the former Italian prime minister Silvio Berlusconi, he once said that “democracy isn’t a state of perfection, it has to be improved, and that means constant vigilance.”

Tabucchi’s prose creates a deep, near-profound and sometimes heart-wrenching nostalgia and constantly evokes the pain of recognizing the speed of life’s passing which everyone knows but few have the strength to accept.
— Alan Cheuse - NPR

A work in the high aesthetic mode, a historical novel cast in delicately evocative prose and filled with witty references to the great figures of modern European literature. In it Italians could examine their political consciences through an artful image of another country’s past. The pleasures to be had from Pereira Maintains are rich and varied, but best of all it’s very enjoyable.

A masterpiece of compression.
— Moshin Hamid

Pereira Maintains is small only in size. Its themes are great ones—courage, betrayal, fidelity, love, corruption; and its treatment of them is subtle, skillful, and clear. It’s so clear, in fact, that you can see a very long way down, into the heart of a flawed but valiant human being, into the sickness of a nation, into the depths of political evil. It’s the most impressive novel I’ve read for years, and one of the very few that feels truly necessary.