The Passion According to G.H. (Paperback) 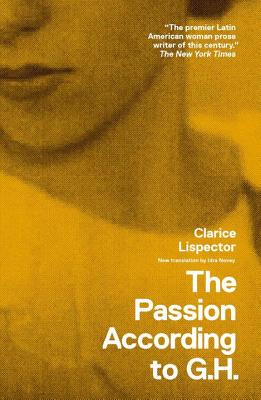 The Passion According to G.H., Clarice Lispector’s mystical novel of 1964, concerns a well-to-do Rio sculptress, G.H., who enters her maid’s room, sees a cockroach crawling out of the wardrobe, and, panicking, slams the door—crushing the cockroach—and then watches it die. At the end of the novel, at the height of a spiritual crisis, comes the most famous and most genuinely shocking scene in Brazilian literature…

Lispector wrote that of all her works this novel was the one that “best corresponded to her demands as a writer.”

Caetano Veloso is one of Brazil's foremost musicians.

Idra Novey is the award-winning author of the novels Those Who Knew and Ways to Disappear. She teaches fiction in the Creative Writing Program at Princeton University.

She is quite a thing to discover indeed.
— The Los Angeles Times

[Lispector] left behind an astounding body of work that has no real corollary inside literature or outside it.
— Bookforum

Her images dazzle even when her meaning is most obscure, and when she is writing of what she despises she is lucidity itself.
— The Times Literary Supplement

Over time, I’ve come to admire and even love this novel. In fact, as soon as I slammed the book shut, my understanding of G.H.’s story began to take on an almost-corporeal reality. Trying to put this into words is a slippery thing. What I was beginning to appreciate was that I could not consider Lispector’s philosophical concerns for any length of time without losing my grasp on those concerns, yet I could somehow feel them, sense the substance of them in my own mind, in those deep pools of thought where language doesn’t quite reach, and which words can’t express.
— Emma Komlos-Hrobsky - Tin House

Lispector's prose is unforgettable... still startling by the end because of Lispector's unsettling forcefulness.
— Boston Globe

A lyrical, stream of consciousness meditation on the nature of time, the unreliability of language, the divinity of God, and the threat of hell.
— The Rumpus

One of 20th-century Brazil’s most intriguing and mystifying writers.
— The L Magazine

I had a sort of missionary urge with her... but I started thinking, even when I was 19: How can I help this person reach the prominence she deserves?
— San Francisco Chronicle