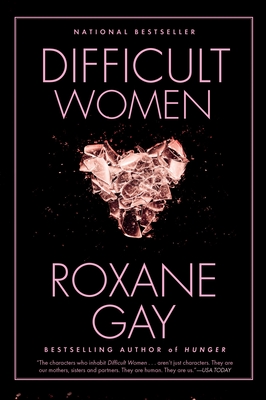 “A 'difficult woman' has become shorthand for one who speaks her mind, who questions patriarchal power, and who refuses to be defined by a standard of femininity. The women who populate Gay's story collection are all difficult in their own ways -- mothers, sisters, lovers, some married and some single, most of flesh and one of glass -- yet they are all searching for understanding, for identity, and for ways to make sense of a sometimes nonsensical, cruel world. Some of Gay's stories are graphic, some are allegorical, and all are important commentaries on what being female looks and feels like in modern America.”
— Bex Gilmer (W), Bloomsbury Books, Ashland, OR

A national bestseller from the "prolific and exceptionally insightful" (Globe and Mail) Roxane Gay, Difficult Women is a collection of stories of rare force that paints a wry, beautiful, haunting vision of modern America.

Difficult Women tells of hardscrabble lives, passionate loves, and quirky and vexed human connection. The women in these stories live lives of privilege and of poverty, are in marriages both loving and haunted by past crimes or emotional blackmail. A pair of sisters have been inseparable ever since they were abducted together as children, and, grown now, must negotiate the elder sister's marriage. A woman married to a twin pretends not to realize when her husband and his brother impersonate each other. A stripper putting herself through college fends off the advances of an overzealous customer. A black engineer moves to Upper Michigan for a job and faces the malign curiosity of her colleagues and the difficulty of leaving her past behind.

From a girls' fight club to a wealthy subdivision in Florida where neighbors conform, compete, and spy on each other, Gay gives voice to a chorus of unforgettable women in a scintillating collection reminiscent of Merritt Tierce, Anne Enright, and Miranda July.

ROXANE GAY is also the New York Times bestselling author of the memoir Hunger; the story collection Difficult Women; the novel An Untamed State, which was a finalist for the Dayton Literary Peace Prize; the essay collection Bad Feminist; and several comic books in Marvel's Black Panther: World of Wakanda series. She is a recipient of the PEN Center USA Freedom to Write Award, among other honors. She divides her time between Indiana and Los Angeles.