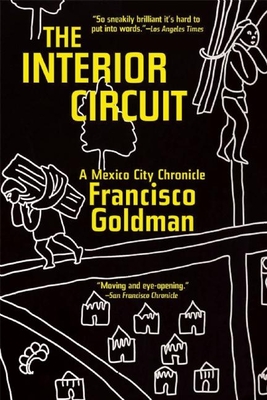 "The Interior Circuit is a deceptively ambitious book that succeeds oh so incredibly well. Called a chronicle of Mexico City, it is part history part personal memoir, partly an examination of Mexico’s politics and narco-corruption, and ultimately a love letter to Goldman’s deceased wife and to the city she hailed from. It’s fascinating and beautifully told, and with Mexico’s 2018 elections looming, just as timely as when it was published in 2014." -- Chris

"Remarkable...Sentence by sentence, Goldman brings to life a city that is bewitching, terrifying, beautiful....Goldman brings something new to the chronicle] form."--John Freeman, Boston Globe The Interior Circuit is Sue Kaufman prize-winner Francisco Goldman's brilliant chronicle of his emergence from grief five years after his beloved wife's death, symbolized by his attempt to overcome his fear of driving in Mexico City (the DF). When organized crime erupts in the city in an unprecedented way during the summer of 2013, Goldman sets out to try to understand the menacing challenges the DF now faces. By turns exuberant, poetic, reportorial, philosophical, and urgent, The Interior Circuit fuses a personal journey to a searing account of one of the world's most remarkable and often misunderstood great cities. "An indispensable contribution to the growing body of artistic representations of Mexico's most recent years of darkness...there is an urgent, raw beauty in Goldman's] prose."--Rub n Mart nez, Los Angeles Review of Books

Francisco Goldman is the author of the novels: Say Her Name; The Long Night of White Chickens, winner of the Sue Kaufman Prize for First Fiction; The Ordinary Seaman, a finalist for the IMPAC Dublin Literary Award; and The Divine Husband. His last book of non-fiction, The Art of Political Murder, was awarded the Index on Censorship's TR Fyvel Freedom of Expression Book Award.